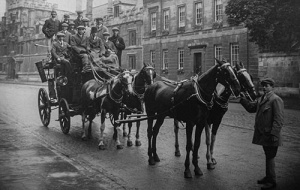 This month’s Treasure is an exciting new arrival in the archives, namely the photograph album of Alan Herbert Fyffe, who came up to Univ in 1903. Fyffe’s granddaughter, Angela Treves, generously presented the album to the archives earlier this year. The album has just been catalogued, and the catalogue may be found here.

Like other undergraduate albums of the period, these photographs are not taken by Fyffe himself, but by professional firms of the time. Fyffe will have started his time in Oxford with a near-empty album, for which over the next few years he will have selected photos to reflect his undergraduate life.

Each undergraduate photograph album therefore sheds light upon their creator’s particular interests. Some, such as William Bryan Todd-Naylor’s album from 1912-14 (which was a College Treasure back in 2014 – see Eights Week 1914), are full of rowing photographs. Other albums might be more interested in hockey or rugby, or perhaps be more intellectual, with group photographs of College literary societies.

Fyffe’s album, however, stands out in covering a remarkably wide range of sports and societies. It also stands out because Fyffe, very obligingly for the historian, tried to identify everyone he could in his album. Over 200 people are named, 68 of them members of Univ., and most can be identified with some certainty, be they Fyffe’s Univ contemporaries, people in other Colleges, or even members of sports teams which he played against. To give a sense of the importance of this album just for the pictorial history of this College, over half of the matriculands of 1903 appear in this album, and three-eighths of all the members who came up between 1901 and 1904 are named here.

When looking at the photos below, therefore, people might like to consult the catalogue to identify the sitters.We start with Fyffe’s arrival at Univ, and this photograph of some of the Freshers of 1903 (fol. 4r, below). He will be easily recognisable in the following photos, with his striking looks, and large build – he regularly stands head and shoulders above many of his contemporaries.

One of the Churchwardens (seen standing second from right in the back row) was A. D. “Duncs” Gardner, later a collaborator with Ernst Chain in his penicillin research (see our previous Treasure “Sir Ernst Chain: Penicillin Pioneer”), and Regius Professor of Medicine. In later years, he remembered these societies as play-reading groups: the Churchwardens, named after the large pipes which can be seen in their photo, and which clearly played a role in their meetings, usually read Shakespeare plays, whilst the Durham Club tended to read more modern work.

But then there was sport. Fyffe did a bit of rowing, joining the Second Torpid in 1904 and 1905, but the album leaves one in no doubt that his great sporting loves were really cricket and athletics. At College level, below is Fyffe and a group of friends setting off to play cricket in Wallingford (fol. 19r, below).

Fyffe also played cricket regularly at university level, but he never made it to the Blues team. However, below he is as part of a university team playing the Lancashire CC team in 1906 (fol. 28r, below).

On the other hand, Fyffe did win a Blue for athletics, his chosen sport being throwing the hammer. Below he is in in the Oxford University Athletics Team of 1906, which won against Cambridge (fol. 24r, below). In the front row, second from right, sits Noel Chavasse, later to win fame as the only man during the First World War to win a VC and Bar (i.e. to be awarded a VC twice).

Fyffe also threw the hammer for his College. The final photograph below is of participants in an athletics match between Univ and Trinity Hall Cambridge (fol. 23r).

Undoubtedly, however, Fyffe’s most unusual extra-curricular activity was his participation as a member of the chorus in the OUDS production of Aristophanes’s comedy The Clouds in March 1905, given in an English translation. This was a prestigious production: no less a figure than Sir Hubert Parry, then Oxford’s Professor of Music, composed the incidental music, and even conducted it himself for the first performance.

Fyffe pasted two photographs relating to the production in his album. The first below shows most of the cast and production team, including Parry wearing a bowler hat and sitting more or less directly in the centre of the photo (fol. 11r, below). But he also included a photo of the chorus of Clouds themselves in full costume (fol. 12r, below).

The Clouds of Aristophanes’ play are women, and the review of the production in The Times of 2 March 1905 observed that “the difficult problem of arranging picturesquely a number of young men in female attire was perfectly surmounted.” Viewers of this photograph may decide whether they agree. Perhaps some of the chorus do look rather self-conscious in their wigs and Grecian dresses, but Fyffe, seen in the bottom right-hand corner, is clearly throwing himself into the fun, sporting full eye make-up and adopting a voluptuous pose.

One may wonder, however, whether it is entirely coincidental that, on the page after this splendid group photograph, there appears this image of Fyffe winning the hammer throwing competition in the Oxford and Cambridge Sports of 1905 (fol. 13r, below).

Further analysis of who appears alongside Fyffe in his photographs would be a rewarding exercise. Just among his Univ contemporaries, 16 of them received given entries in Who was Who, and three of them are included in the Oxford Dictionary of National Biography. But there is one other Edwardian member of Univ who should not be overlooked. Below is Fyffe among the Univ Cricket Team of 1906 (fol. 29r, below).

If we look carefully at Fyffe, we will see that he has someone sitting on his lap… Yes, in the Univ of 1906 there was a College Rabbit, who is shown from another photograph album to have been called “Duchess”. Duchess the Rabbit appears in no fewer than five photos in Fyffe’s album. In the photograph below she is once more, among the Churchwardens of 1906, with Fyffe leaning over to give her a scritch (fol. 31r, below).

Duchess is sitting in the lap of a quiet-looking young man called Cecil William Mercer, who had played the leading role of Strepsiades in the OUDS Clouds (you can try to pick him out in the photo on fol. 11r above). Appearances, however, are deceptive; Mercer would later find fame for the hard-bitten adventure thrillers he wrote under his pen name of “Dornford Yates”.

We know no more about Duchess the rabbit than can be seen in these photographs, but she was clearly a College character of the day.

Looking over Fyffe’s album, and the range of his activities, sporting and cultural, one might reasonably ask what time Fyffe had for his work. The answer, alas, appears to be: not much. He came up to read Law, but switched during his first year to Natural Science instead. However, in October 1905 he was fined £1 for failing to pass his examinations in Holy Scripture. He continued to have trouble with his scripture papers, and although he eventually took his BA in 1910, it was only with a Pass Degree. Nevertheless, in the early 20th century, one suspects that Fyffe’s sporting prowess and his Blue would have carried as much weight, if not more, than a good Honours Degree.

The greater part of Fyffe’s album is devoted to his Oxford years. It ends, however, with a few photos taken after the First World War. The first one below shows Fyffe at an unspecified cricket match in the early 1920s (fol. 35r, below). Some fifteen years have passed since Fyffe’s departure from Univ, and one may, as one wishes, decide how much his wartime experiences have marked him.

It is worth remembering that, of the 68 Univ men who are identified in this album, eight were killed during the First World War, and Fyffe himself had served in the Royal Garrison Artillery. Yet again, though, with a Fyffe photograph, there are other people to catch the eye. Standing looking over Fyffe’s right shoulder is the great cricketing journalist R. C. Robertson-Glasgow. We should also look at the third person to Fyffe’s left; this is the young Douglas Jardine, later notorious in cricketing history as the captain of the England team in the “Bodyline” tour of Australia in 1932/3.

Fyffe ceased to use the album after the early 1920s, and he died, only in his mid-fifties, in 1939. His album passed down through his family until it was presented to this College.

Such, then, is the splendid photograph album of Alan Fyffe, despair of College authorities and hero of College archivists.