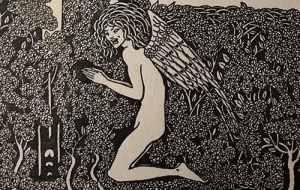 Commonly used in the book trade of the late eighteenth and early nineteenth centuries, the prospectus is a form of advertising used by publishers (and sometimes authors themselves) to promote their forthcoming books or periodicals*. With their diminutive form (the humble pamphlet) and ephemeral nature, prospectuses can sometimes be overlooked by book historians; a fact not helped by their often being in poor condition and poorly catalogued (if at all). That said, the prospectus is a potential mine of information; not only about the particular book being advertised but also about the contemporary publishing industry and the reading habits of the time. Increasingly, prospectuses are receiving the recognition they deserve; and, here at Univ, our ongoing project to catalogue the Robert Ross Memorial Collection is unearthing some beautiful examples of this popular promotional device.

So, what do publishers’ prospectuses look like? The answer is that prospectuses are many and varied; from single sheets to pamphlets with multiple pages, and from the factual and informative to those aspiring to a more deluxe aesthetic. Typically, though, they summarise the content and appearance of a book; with common elements including title and contents pages, glowing reviews, and descriptions of the paper and binding used for each edition.

The images above come from a highly-decorated prospectus advertising a pirated edition of Salomé, issued under the imprint Melmoth & Co. in 1904. Alongside two exquisite Aubrey Beardsley pictures, is a description of the editions available, and the all-important order form!

In addition to being interesting in themselves, prospectuses (as with books) can reveal a great deal about the customers who received them; a keen bibliophile’s annotations might connect the prospectus to a contemporary newspaper review; demonstrate some literary links between publishers, authors, and collectors; or highlight editorial changes made during the publication process. The example below is taken from a prospectus advertising a privately printed (and pirated) edition of The Duchess of Padua (Paris: Charles Carrington, 1905); so extensive are Walter Ledger’s notes that he has tipped in an extra leaf for them. 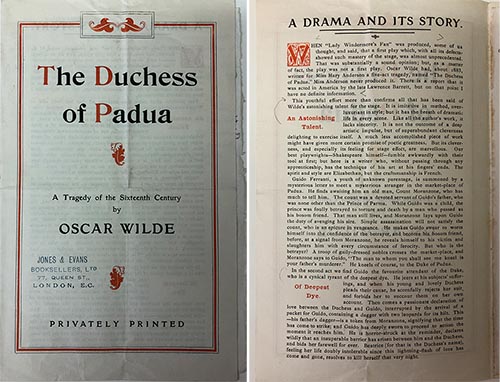 The Robert Ross Memorial Collection also boasts other publishing ephemera that might easily have been lost but for Ledger’s passion for collecting. One example is the publisher’s paper band; wrapped around one book to advertise another. Here is an American band for Oscar Wilde’s Poems, and three French examples for works on aesthetic literature including one on the theatre of Oscar Wilde.

Duff, D. (2020). The book to come: Literary advertising and the poetics of the prospectus. In L. Ferlier & B. Miyamoto (Eds.), Forms, formats & the circulation of knowledge. Leiden: Brill.