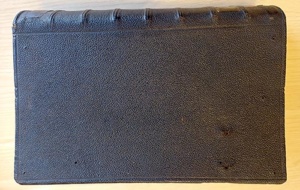 This month for our treasure, we continue our series on interesting book bindings in Univ’s Library collections.

This one is of interest because it is is our only Shagreen binding. The binding encloses a Dutch Bible, printed in Amsterdam in 1679 (Images 1 and 2, see gallery below). The style of binding dates from the late 17th century, and the book contains a College bookplate from around 1750, suggesting it joined our collections half a century or so after being bound.

Shagreen (or chagrin in French and German) is a term which has been used, at different times, to describe several different materials. It seems to come from the Turkish ‘çāghrī’, meaning “rump of a horse”, and was used to describe the rough skin, before the French chagrin became a metaphor for something causing anxiety. When in the context of 17th and 18th century bookbinding, it usually refers to the skin of an ass or a donkey. However, more recently it has been used to refer to leather made from sharkskin, or the skin of a ray. Our shagreen binding, shown in Image 3 (see gallery below), is the former kind.

The skin was given texture by stretching and moistening it, and then covering the surface with Chenopodium seeds, which are small and hard and so would not be crushed. This was then covered with a cloth, and the seeds were trampled into the skin. After the skin had dried, the seeds could be shaken off, leaving behind small indentations in the surface of the skin. This could then be soaked in water, which would cause the crushed skin beneath the indentations to swell, and create the pimples you can see in Image 4 (see gallery below). Then the skins were stained, usually black, as is the case here.

Shagreen bindings could then be blind-tooled, a process by which patterns were applied to the binding by applying pressure to create indentations, although very occasionally they were gold-tooled, leaving behind a gold imprint (an example of blind tooling can be seen on our pigskin binding, linked to above). Our shagreen binding, however, is without this kind of decoration, except for a very fine line of blind tooling around the edges of the boards. Perhaps more impressive is the gilt coating across all three edges of the text block, meaning the book shines gold in the light (Image 5 – see gallery below). The text block edges have also been gauffered (embossed with a simple pattern) around the edges. This is difficult to make out, but can be seen in Images 6 and 7 (see gallery below).

The book was, at some point, kept in a chained library, and the holes from where the chains would have been attached are clearly visible in Image 8 (see gallery below). Univ probably stopped chaining new books around 1740, and it is likely that existing chains were removed from books in 1744/5. This bible probably was chained at Univ, suggesting it arrived in our collections before this date. This means that either the bookplate within the book was in use earlier than we had previously believed (1750), or that the book was not given a bookplate until after it had been in our collection for a while.

Additional holes can be seen on the binding, circled in red in Image 9 (see gallery below). These must have been part of the original binding design as there are no corresponding holes in the pastedowns (pastedowns being the paper glued to the inside of the cover). These were probably designed to attach decoration to the cover of the book, possibly corner pieces or clasps in silver or brass. These have since been lost: it was common practice for colleges to remove decorations like these before they put the book on the shelf.

Another point of note on this binding are the seven raised bands seen on the spine of the book (Image 10 – see gallery below). These ridges are created by the binding, and show where the cords holding the pages together run under the leather.

There are several examples of Dutch bibles from a similar period in Oxford, and it was probably quite common for colleges to hold bibles in a range of languages. However, ours appears to have the distinction of being the only Dutch bible in Oxford with a shagreen binding (or at least, the only one which has been catalogued at this time!)

You can read about one of our other bindings in a previous Treasure here.