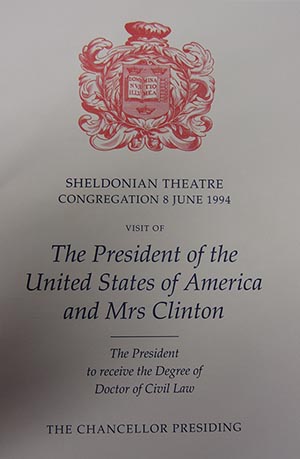 At Encaenia this year, one of the recipients of an honorary doctorate was Hillary Rodham Clinton, former US Secretary of State. Mrs. Clinton was not the first member of her family to be honoured by the University, because back in 1994, her husband Bill Clinton, then President of the USA, and Old Member of Univ (matr. 1968), had received a Degree by Diploma. President and Mrs. Clinton’s degrees slightly differ in that Degrees by Diploma are reserved for Heads of State or Royalty and conferred on special occasions, whereas Honorary Degrees are conferred at Encaenia. It is an interesting question, however, whether any other couples have both been honoured with special degrees by Oxford.

As a reflection then, of his wife’s honour, we look back in this Treasure to a memorable day in our history when the first American President to have attended Oxford came back in state to his old University and College on 8 June 1994 to receive his degree.

The College had followed the Presidential election of 1992 with great interest, especially once it was clear that one of its own was one of the chief candidates, and in October 1992, a month before the election, Bill Clinton was elected an Honorary Fellow of University College. 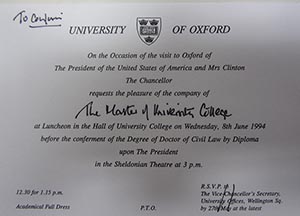 When the decision was taken in 1994 to confer a Degree by Diploma on the new President, careful discussions had to take place about the arrangements for the visit, to ensure that all the proprieties were observed, and the papers of John Albery, Master of Univ at the time, contain a great deal of correspondence about arranging the day. The intention always was that the degree ceremony would be preceded by a grand lunch in the Hall of Univ, with an opportunity beforehand for the President to meet some members of the College.

A sense of the sensitivities involved comes from the document above. Because this was deemed a University, rather than a College, event, John Albery was placed in the curious position of having to receive an invitation to attend a lunch in his own College. 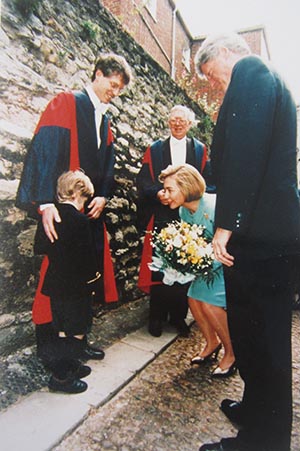 On the day itself, the Presidential party arrived by helicopter on Christ Church Meadow, and entered Univ via Logic Lane. There Alisdair, the son of one of our Fellows, Nicholas Rawlins, shyly presented a posy to Mrs. Clinton, with John Albery looking on:

The President also had a chance to meet some MCR members. The Hall was well filled for the lunch (there are a several draft seating plans in the archives), and a special menu served. After lunch, the President was able to have a few words with our Head Chef, Ken Tucker, and with Sandra Williamson, then Hall Supervisor (see gallery below for images.)

Undoubtedly, though, the most personal part of the day was yet to come. One part of the Presidential visit had been fixed in stone at a very early stage. When he was up at Univ, President Clinton formed a great friendship with our then Head Porter, Douglas Millin. When the Presidential visit was first mooted in late April, and a timetable was being drawn up, it was clear from the first that a moment had to be set aside for the President to have some quiet time with Douglas, as the draft timetable (see image gallery below) from 25 April shows. 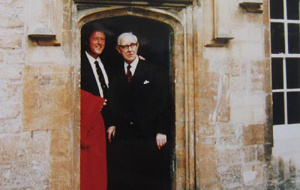 Thus, after lunch that day, George Cawkwell did indeed escort the President to his old rooms in Helen’s Court to meet Douglas, and the rest of the grand party assembled had to do their own thing whilst the most powerful man in the world had a private chat with the retired Head Porter of Univ.

President Clinton has been to Univ several times since then, and of course his daughter Chelsea came up to this College in 2001. One of his more notable visits was in 2003, when he and another great Univ politician, Bob Hawke (matr. 1953), Prime Minister of Australia from 1983-91, both attended a dinner in Hall to mark the centenary of the Rhodes Scholarships. However, the 1994 visit was undoubtedly the grandest and most memorable occasion.