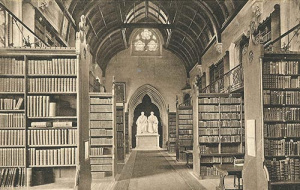 Univ’s Old Library is a building that never fails to impress with many ornate and beautiful decorative features. But one of its overlooked and difficult-to-see features are the finials and wood carvings found at the top of the Library’s bookcases. Carrying on the topic of College-owned wood art (see last month’s Treasure A Univ altarpiece restored) the bookcase carvings are the subject of this month’s Treasure.

The bookcases are original fittings and were made for the Library in 1862. Figure 1, above, shows the Library shortly after it opened and there are the bookcases with their fine finials. In those days the Library consisted of a ground floor only, but when the Poynton Room was added in 1937 the bookcases moved upstairs where they are to be found today. It is easy to see why the carvings can be missed as they sit three metres above floor level, but when the Library opened in 1862 there were galleries along the north and south walls, so it may have been possible to see the carvings from there.

The bookcases are made of solid oak. Oak trees can live to be hundreds of years old, and it would be nice to imagine that the trees which became the bookcases sprung into life around the same time as the College’s foundation. After felling the trees were quarter sawn. This is a very expensive way of cutting timber, but it makes the wood more stable, durable, and less susceptible to warping. It is also aesthetically pleasing because of how the grain appears.

Each bookcase top consists of a finial, two roundels, and a relief which depicts the leaves, flowers and seeds of British plants and trees. The first one, figure 2 (see gallery below for figures 2-7), rather appropriately, depicts oak – you can see the leaves and the acorns. The oak tree has many cultural meanings associated with it, one being that its acorns were believed to preserve youth and bring good luck, thus an appropriate decoration for a college library.

Another plant that is depicted is the hop (figure 3): perhaps the carver was making a wry observation about student drinking habits. The others are a little trickier to identify and we are working on drawing up a definitive list. There are definitely two types of geranium (figures 4 and 5), but then Figure 6 has what appears to be a buttercup flower, while Figure 7 could be sycamore or maple.

What we don’t know is if these carvings were commissioned, or the choice left to the whim of the carpenters and carvers, nor how many were involved in this aspect of the building’s construction. It is possible that they were all done by one person, and the uniformity of the carving would suggest this. The identity of the person who gave us these beautiful carvings remains, however, a mystery.

Decorative wood and stone carvings were part of the budget for the project (see accounts kept in University College Archives UC:F8). Payment for the carving went through Symm, the Oxford builder who saw to the construction of Library. 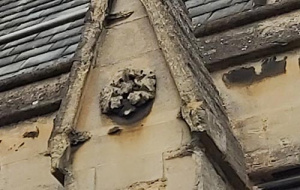 The floral stone reliefs (Figure 8) found on the gabled headed buttresses on the north and south exterior of the building, and the elaborate main doorway are probably the work of John Birnie Philip, a sculptor and associate of the building’s architect George Gilbert Scott.

Whether by design or coincidence the buttresses on the outside with their floral reliefs line up with the position of the bookcases on the inside. Unfortunately, the stone relief is so worn that it is hard to make out what is depicted in each relief, but it would be nice to imagine that the plants depicted on the inside and outside of the building are the same.

Finally, why was it that botanical designs were chosen to decorate the bookcases of the Library? It may have been that George Gilbert Scott asked for them to be included. In Exeter College Library, a later design by Scott, the bookcases have carvings of grapes on them. Ours could simply have been the preference of the anonymous carver(s) who wanted to practise their skills at carving plants. Or maybe they were chosen to represent the flourishing and learning that would take place in the Library, a space which has inspired many generations of Univ students, and which will continue to do so for many years to come.