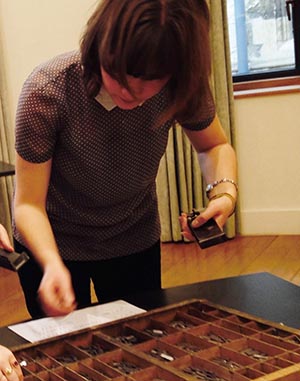 In 2014 Univ’s Team English got their hands inky while learning how to print in the traditional way (see Figure 1). Setting metal type by hand and printing on a hand press gives students an understanding of the intricate process by which the literature they study takes on a physical form. As far as we know, this was the first time since the 1680s that anyone had printed in this way at Univ.

The previous press on site was run by Obadiah Walker, one of Univ’s most fascinating yet tragic Masters. Appointed Master in 1679, Walker converted to Catholicism in early 1686, confirming the rumours that had been rife for a number of years. When the Roman Catholic King James II moved to protect Walker and his followers, he also gave Walker permission to print 36 theological works, most of which were written by fellow-Catholic, Abraham Woodhead. Unable to worship in Univ’s chapel, and shunned by the University Press, Walker went about setting up both a Catholic chapel and a printing press within the College.

When James II was deposed in November 1688, Walker was forced to flee Oxford. Heading initially for London, he then changed course for the coast (hoping to get to France) but was arrested and sent to the Tower of London. Charged with being a traitor, Walker remained in the Tower until January 1690, by which time, the Mastership of the College had been declared vacant and a successor elected. Obadiah Walker died in 1699, having spent his final years living quietly, with financial help from his friends, in London.

Although many of Obadiah Walker’s papers survive in the College Archive, there is relatively little relating to his role as publisher. There are tantalising (if brief) references in contemporary accounts, most notably in the diary of the antiquary Anthony Wood¹, who kept a detailed diary of everything happening in Oxford at this time. From Wood, we know that in October 1686, having been given the licence to print by the King, Walker returned to Oxford from London with ‘a great deal of paper’. Wood also notes that Walker’s original intention was to have his books printed by Leonard Lichfield, but when Lichfield leaked information to Walker’s opponents so that they were able to rebuff his works more quickly, Walker moved his operation to College.

Even though Obadiah Walker brought in an experienced press-man to take care of the practical side of printing, for a press that was in use for such a short time (roughly April 1687 to November 1688), it was remarkably productive. The press-man has been identified as Henry Cruttenden², who may himself have employed compositors and printer’s devils³ to help with the work. Between them, they printed more than 2000 printed pages, in around 17 titles. The precise location of Walker’s press has not as yet been identified, but it was probably either within the lodgings (on the east side of Radcliffe Quad) or in the stables that were demolished when our current Master’s Lodgings were constructed. 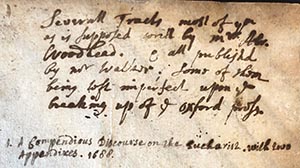 Given the religious turmoil of the time, it’s hardly surprising that the books printed at Univ do not reveal the name of either the author or the publisher. For example, Figure 2 shows part of the page where William Smith (the Fellow who gathered up Walker’s papers once he’d fled Oxford) has listed the titles bound into a volume in our collection (II.5.6). It reads:

Severall Tracts most of [them] as is supposed writ by Mr Abr. Woodhead, & all published by Mr Walker, some of them being left imperfect upon [the] breaking up of [the] Oxford press.

1. A Compendious Discourse on the Eucharist, with two appendices. 1688. 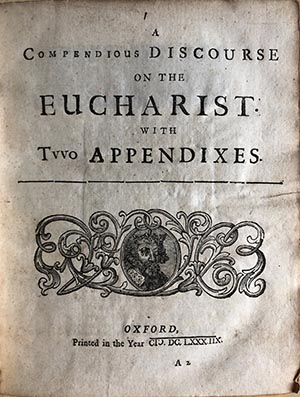 As seen in Figure 3, the title page lacks the names of the author and publisher, and it was only through later research that the people responsible were identified4. The ornamental devices Walker used at Univ’s press can also provide another clue. Figure 3 shows a very distinctive ornament featuring Univ’s mythical founder, King Alfred. Another pair of devices (see Figure 4 below) used by Walker’s press depict angels: one holding the rose of England and the other the thistle of Scotland (possibly a reference to James, King of England and Scotland).

The anonymity of the publications begs the question: did Obadiah Walker print more than the 17-odd titles than have been identified? In researching this piece, another four possible titles have been found. This time, the clue comes from the individual pieces of metal type that were used at Univ’s press. Over time, metal type is liable to become degraded through use. The pressure required to leave a good impression of ink on paper can cause damage, and even being dropped on the floor by a printer’s devil can change the shape of the metal type.

In the example below (Figure 5), the first A, left, is from a work known to have been printed at Univ. The second A, right, is from another work (printed anonymously, with papist leanings), but they appear to have been printed from the same piece of type. There is some distinctive damage at the point of the A that looks rather like a ski-jump. We’ll need to examine additional copies of both works to make sure that the similarities are not coincidental. We hope that further research will allow us to produce a list of all the books that were printed at Univ, along with a more detailed history of Obadiah Walker and his press.

¹Anthony à Wood, The life and times of Anthony Wood, antiquary, of Oxford, 1632-1695, described by himself: collected from his diaries and other papers by Andrew Clark (Oxford: Printed for the Oxford historical society, at the Clarendon press, 1891-1900).

²Henry R. Plomer, A Dictionary of the Printers and Booksellers Who Were at Work in England, Scotland and Ireland from 1668 to 1725 (London: Bibliographical Society, 1968).

³A compositor selected individual letters from a case of metal type and ‘composed’ the letters into a full page. A printer’s devil was an apprentice, usually a boy, who did odd jobs in the printing workshop – everything from mixing ink to lighting candles.

If you’d like to know more about Univ during Obadiah Walker’s time at Univ, read chapter 10 of Robin Darwall-Smith’s A history of University College, Oxford (Oxford, 2009).