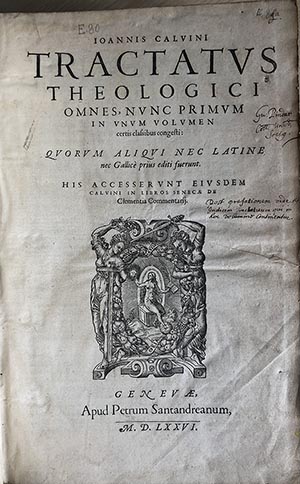 This month’s treasure is Univ’s only example of a pigskin binding on an early printed book¹. The book in question is John Calvin’s Tractatus theologici omnes, and was printed in Geneva in 1576. The text contains, for the first time in one volume, all of Calvin’s theological works including his early commentary of Seneca’s De Clementia. It was given to Univ by William Pindar (d. 1678), who was a Fellow of the college. He was also Chaplain to the Right Honourable Ford, Lord Grey of Werke (a fascinating figure who, after Pindar’s death, became embroiled in a court case charged with seducing his wife’s sister, and not one but two attempts at political rebellion). A couple of Pindar’s sermons have been digitised, and can be accessed via SOLO here and here. On his death he bequeathed to Univ any of his books which the college did not already own. Records indicate that through this Univ gained 17 books which had been Pindar’s, including this one, which contains an inscription on the title page denoting this (Image 1). 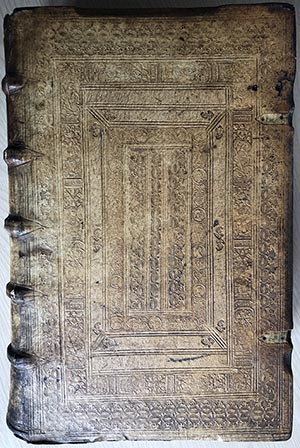 Having been printed in Geneva, the book was probably then transported to Germany to be bound. During the 16th century, it was common for German binders to use alum tawed pigskin to cover books with wooden boards, so this seems the most likely place for this work to have been bound.

And what a binding! Over the years, it has darkened to a murky beige, and the pattern on the front has faded a little, but initially this binding would have been a much brighter white. Still, the detail which remains is stunning (Image 2). Beneath the pigskin, the boards (that is, the material used to create the covers of a bound book) are probably beech wood, with bevelled edges.

Pigskin is tough and durable, but does not always take well to intricate decoration such as the application of gold leaf, possibly due to its tough nature. As such, a technique known as blind tooling is most commonly used, and that is what is evidenced on our pigskin binding. Blind tooling involves making impressions on the covering material by heating tools and then applying them. Perhaps the most impressive tooling on this binding comes from a roll. A roll is a tool which comprises of a wheel, with engravings around the circumference, so that if enough pressure is asserted when it is rolled over the cover, it leaves behind an imprint in a continuous repeating pattern. In places you can even see where there is an overlap of these rolls on the corners of the design (Image 3). 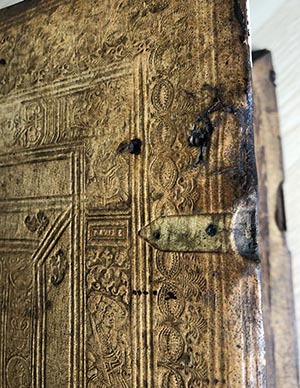 The final personification, Light, is depicted holding what looks to be a dagger, which seems an unusual choice. An alternative interpretation is that this is not LUCREO but LUCREC, and forms a representation of Lucretia, about to commit suicide using her dagger. Lucretia was a Roman noblewoman whose rape and subsequent suicide later writers described as having led to the fall of the monarchy and the establishment of a republic. This seems an unlikely fourth component of the roll, given the other three are all titled after virtues.

On the other hand, the creator, having started with Prudence and Justice, had clearly decided not to continue with the rest of the four cardinal virtues (fortitude and temperance), opting for sweetness instead, so the fourth figure may well also diverge from the theme. Possibly the audience of the time would immediately understand the moral message Lucretia stood for: honour, perhaps, or fidelity, or loyalty. Time has led to these decorations fading, which makes their interpretation a challenge to the modern reader. 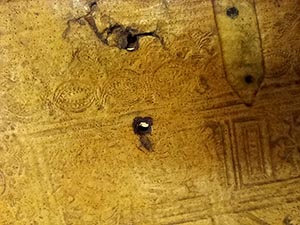 This book would have had metal clasps on the side to keep it closed, but those are no longer present. The marks and holes from where they would have been fixed can be seen in Image 5. Further holes would suggest that this book was once chained to a bookshelf (Image 6). Univ’s undergraduate library originally consisted of chained books, up until the 1740s when the chains were removed, so it is likely that it was during this book’s early years at Univ that it was chained.

Inside the book can be found two of Univ’s bookplates (Image 7). Bookplates cannot be used as a precise dating method, as they are used over many years and there is often some overlap between different styles and printing. However, they can be used to give an estimate of when a book might have arrived in our collections. The bookplates found in this volume were used at Univ from around 1700 and 1750, suggesting the book came to Univ not long after Pindar’s death. This is what would be expected from a bequest. 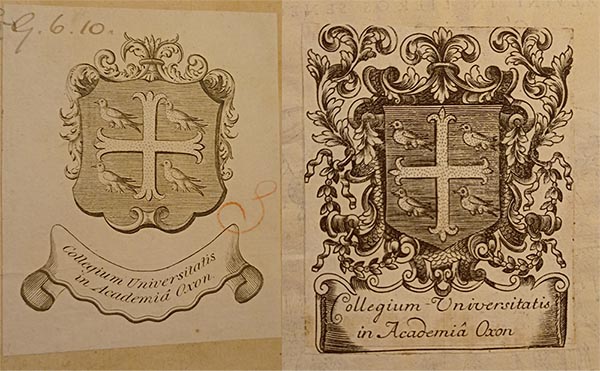 So, this book, which started its journey in Geneva, travelled via Germany to England and eventually found its home in Oxford, where it continues to live to this day. It is interesting to speculate what the binder from almost half a millennium ago would think if they could see their work now, and to wonder what will come next in the journey of this beautiful binding.

We have many more exciting bindings at Univ, so keep an eye out for further Treasures featuring those in the future.

¹Univ also has two manuscripts which are in pigskin bindings. These bindings both date from the 19th century, although the manuscripts themselves are from the 13th.