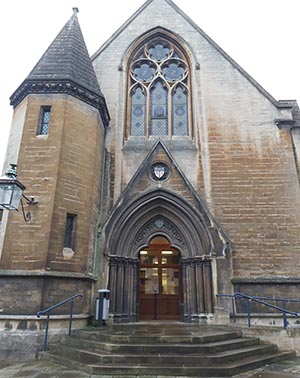 2021 marks the 160th birthday of Univ’s Old Library and so for this year’s final Treasure feature we thought it fitting to mark this anniversary by exploring two treasures found in its fabric: the main entrance and the window directly above it (Fig. 1, left).

The entrance (Fig. 2, below) is an iconic feature of the building, not least because everyone who enters the library passes through it. The stone work is decorated with intricately-carved foliage decorations and two gargoyles (Fig. 3, below). The gargoyles’ faces are unidentified: whether they were likenesses of real people (as is the case with some other Oxford gargoyles) is not known.

The stone carved doorway was almost certainly the work of John Birnie Philip (1824-1875), an associate of George Gilbert Scott, the building’s architect, and their collaboration makes the exterior of this building a par excellence example of Victorian architecture. Philip was to the stone carving world what Gilbert Scott was to the architectural world, and his work can be found hallmarked on many of Victorian Britain’s famous building projects. He was involved in the restoration projects at Ely Cathedral and St George’s, Windsor, and created the Frieze of Parnassus on the Albert Memorial in London. 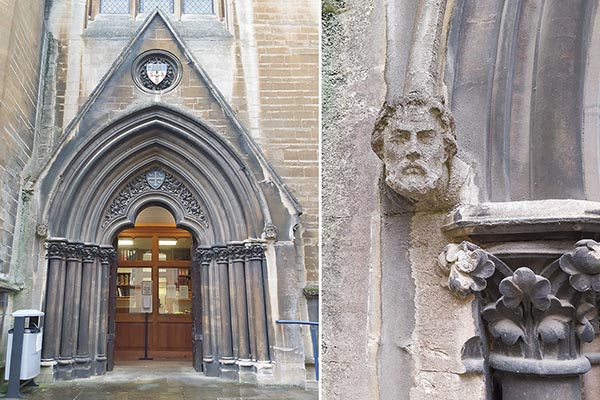 The doorway is set in a pointed gable. At the top (inside the roundel) you can see the armorial shield of John Scott, Lord Eldon (Fig. 4, below). As is well known, the motivating factor for building this library was to provide a home for the statue group of the Scott brothers, Lord Eldon and Baron Stowell. You can read more about their story here. Whether there was ever a finial at the top of this gable is a mystery. One of the earliest photographs we have of the east end of the Library does not show one (Fig. 5, below), but it does show us another vanished piece of College fabric: the wall that once stood between the Library and the kitchen block. 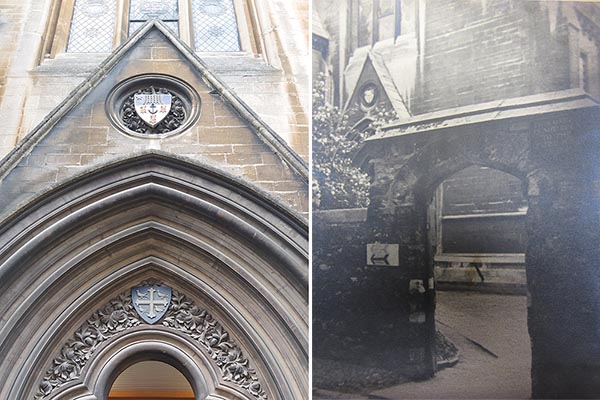 Since 2011, the entrance can also be seen in many of Univ Library’s books. In that year a new bookplate was commissioned (Fig. 6, below) when we marked both the library’s 150th anniversary and Christine Ritchie’s retirement after 25 years’ service. Philip’s doorway was used for the design, and since 2011 this plate has been pasted inside every book which is placed on our Library’s shelves. 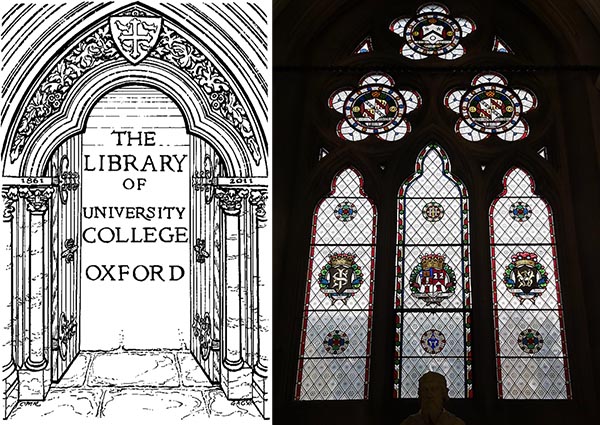 Now we take a look at the east window and the design of its stained glass (Fig. 7, above). The window’s tracery consists (from the top down) of three round windows with cinquefoils, and, below these, three lancet windows. At the very top can be seen the shield of Frederick Plumptre (Master when the building was constructed) while the lower two feature those of James Farrer and Oliver Farrer, Lord Eldon’s trustees. 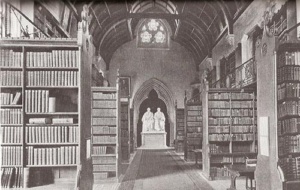 The statues of the Scott brothers came with a donation of £5,000 from Lord Eldon’s trustees which covered most of the overall cost of the project, the deficit being covered by the College and Plumptre. Plumptre’s grants covered the cost of erecting the gallery (seen in Fig. 8), which used to run around the reading room before the first floor was built in the 1930s, and the stained glass in the new Library’s windows which acknowledged not only the generosity of the building’s benefactors but also those who had supported the college generally.

The outer lancet windows each have a shield with a monogram. On the left is “JS” for John Scott and on the right “WS” for William Scott. At the crest of the William’s shield is a baronet’s coronet (William was raised to the peerage in 1821 as Baron Stowell), while in the central and left-hand windows you can see John’s coat of arms, with an earl’s coronet at the crest, signifying his rank of peerage. You can also see in the two outer windows the Scott family’s motto, “Sit sine decus labe”: Let honour be without stain. 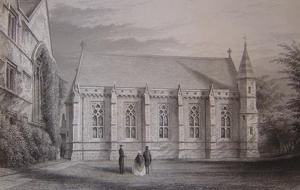 The window formed part of a scheme in the new building which gave recognition to benefactors both of the new Library and the College, generally (UC/FA8/C1/4). If you had gone into the Library as it was between 1861 and 1937 (Fig. 8, above) in each of the windows on the north and south sides you would have seen the shield of John Radcliffe, Roger Newdigate, and William of Durham, to name a few. If you look closely at Fig. 9 you can see that the windows had stained glass in them. Some of this glass was brought over from the previous library (located in what is now the Allington Room)¹. 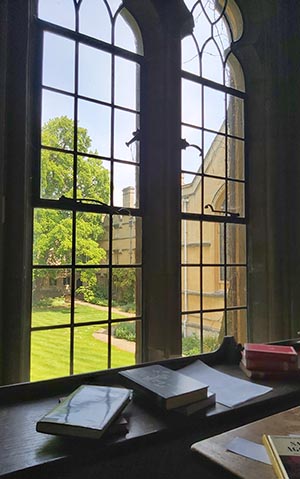 In the 1930s, the library building underwent a major renovation and the only stained glass to remain was that in the east window². Space and light appear to have been the two main reservations about the building. As the 1937 Record noted: ‘The College Library has been a byword as a building which provided the minimum of seating […] and excluded the maximum of light.’³ Accordingly an additional floor was constructed and the ceiling painted in a lighter colour. In order to let more light into the building, the apertures in the tracery of the north and south side windows were altered to be made bigger, and the stained glass in them was replaced with clear glass. Subsequently, this has afforded readers sitting on the north side upstairs a pleasant view over the Fellows’ Garden (Fig. 10).

As indicated by the scale, cost, and the footprint it has left on the main site, the library was one of the College’s major building projects in the nineteenth century. It is a building in which many Univites spend a substantial part of their time at the College, and where an unquantifiable amount of intellectual energy has been expended. It’s even reputed to have its own ghost (more on this another time, perhaps). For these reasons it has accumulated a folklore of its own and has been regarded with a great deal of fondness during its 160 years’ existence, and will no doubt continue to endear itself to the Univ community for many years to come.

¹ ‘Architectural Improvements, &c.’, Oxford Chronicle and Berks and Bucks Gazette, 19th October 1861, p. 5.
² This was the case until 1992, when (following a further renovation) a new west window was installed featuring stained glass that acknowledged the assistance of the American Friends of Univ.
³ University College Record, (1937), p. 8