In this series we highlight audio and video interviews with, and profiles on, a wide range of Univ OMs. Today we feature Armando Iannucci (1982, English), VS Naipaul (matriculated 1950) and Stephen Hawking (1959, Physics). 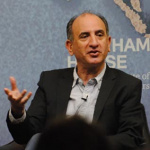 Armando Iannucci, OBE, (1982, English) is a satirist, writer and director. Recently he directed the films The Personal History of David Copperfield (2019) and The Death of Stalin (2017). He also created The Thick of It and Veep, winning two Emmys for Veep.

This edition of BBC Radio 4’s Profile, presented by Mary Ann Sieghart, was first broadcast in 2009. Listen here. You can also listen to him discussing adapting Dickens for the big screen in Univ’s own podcast here. 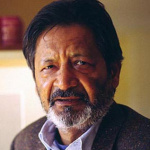 Sir VS Naipaul (matriculated 1950) was born in Trinidad in 1932 and wrote more than thirty books, including A House for Mr Biswas (1961). He was awarded the Nobel Prize in literature in 2001. You can read more about his life here.

In this edition of BBC Radio 4’s Front Row from 2001, VS Naipaul talks about his decision to leave Trinidad to pursue a career in writing, the influence of his journalist father, composing his first published work on borrowed paper at the BBC and why he doesn’t mind his irascible public persona. Listen here. 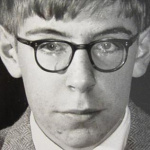 Professor Stephen Hawking, FRS, (1959, Physics), former Honorary Fellow, was an English theoretical physicist, cosmologist, and author who was director of research at the Centre for Theoretical Cosmology at the University of Cambridge. Hawking was a Fellow of the Royal Society, a lifetime member of the Pontifical Academy of Sciences, and a recipient of the Presidential Medal of Freedom.