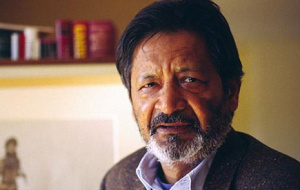 The College is saddened to report the death of the novelist Sir VS Naipaul at the age of 85. In addition to being an OM (1950, English) Sir Vidia was an Honorary Fellow of Univ.

Born in Trinidad in 1932, Sir Vidia wrote more than thirty books including his masterpiece A House for Mr Biswas (1961) and In a Free State (1971), for which he won the Booker Prize.

Graduating from the Queen’s Royal College in Port of Spain, Trinidad, he won a government scholarship giving him entry to a Commonwealth university of his choice; that choice was Oxford and University College.

He was awarded the Nobel Prize in literature in 2001, with the committee noting that his work: “united perceptive narrative and incorruptible scrutiny in works that compel us to see the presence of suppressed histories.”

Renowned for his often uncompromising stances and a refusal to glamorise or idealise that with which he found fault, his career was both glittering and, at times, controversial, whilst his long-running feud with fellow travel writer and one-time protégé Paul Theroux was the stuff of 20th century literary legend. Reconciled in later years Theroux said on the news of Sir Vidia’s death: “He will go down as one of the greatest writers of our time.”

The College sends its deepest sympathies to Sir Vidia’s family and friends.

The BBC’s obituary for Sir VS Naipaul can be read at bbc.co.uk/news