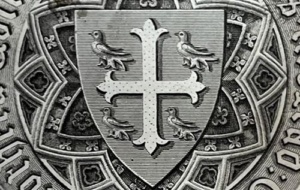 The “Ex Libris: bookplate is, on the one hand, used to clearly mark a book as one’s property, so that it might be properly returned by those honoured enough to borrow it. But as well as ownership, a book collector conveys a very specific sense of their self-image through a bespoke bookplate. Elsewhere in this Treasures series we have seen Walter Edwin Ledger, collector of the Robert Ross Memorial collection, present himself (with accuracy, according to accounts of his contemporaries) wearing his trademark sailor suit while in recline and gazing dreamily by the window.

What kind of image, then, has Univ Library presented to its members? Here we have eight examples of the Library’s bookplate, stretching over 360 years. All estimated dates for the bookplates are provided by James Sutton, in the University College Record of 1968.

This example (below) from around 1650 is the busiest of all Univ’s historic bookplates, as it centres the college’s enduring martlet coat of arms, surrounded by six other coats of arms. The abundance of heraldic imagery gives this bookplate a magisterial feel and, even in monochrome, injects a degree of pomp into the Library’s collections. 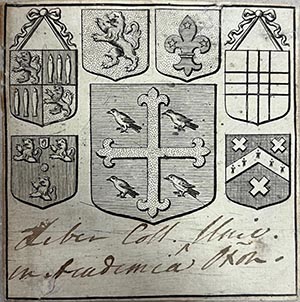 Peter Bayley (matric. 1940), English Fellow from 1949–72 and College Librarian from 1967–72, notes that the coats of arms are those of college founders and benefactors [1]. The fleur-de-lis at top-middle-right is the coat of arms of William of Durham, Univ’s founder, while the single lion rampant next to it is the coat of arms of Robert Dudley, Chancellor of Oxford University from 1564–1588. The coat of arms with three demi-lions at bottom-left is of the Bennet family. Sir Simon Bennet funded the Bennet Fellowship, which his descendent Thomas Bennet, Master of Univ 1691–92, held for a time. 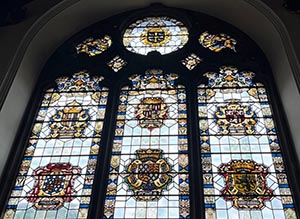 All of these coats of arms, with the exception of the chevron and saltire design at bottom-right, also appear in the stained-glass windows, that date from the early 20th century, at the west wall of Hall. Clearly then, at this time it was an imperative throughout college to celebrate the wealth (and generosity) of the college benefactors. It’s natural that the Library bookplate would have been a part of this endeavour, as it reflects the fact that books were very expensive, so libraries relied on the benefaction of the rich to stock their collections.

Our next bookplate (below), from around 1700, does away with competing logos, and showcases only the college coat of arms. Presented rather plainly in the previous plate, here the Library has added much ostentation to the college logo, with a voluminous feather design and a magnificently curly serif on the text. Importantly, this plate concentrates on representing the character of the college rather than those who funded it. With no other designs to distract the eye, Univ’s martlet emblem stands proud and its symbolic lack of feet is clear to see. The martlet traditionally never roosts, allegorically representing continuous effort; never ones to stand idle, Univites have embodied a commitment to hard work and studiousness since 1249! 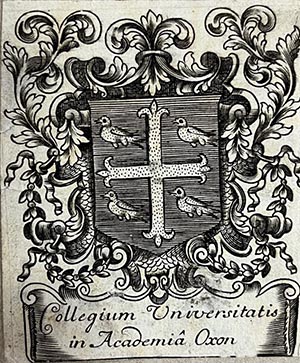 The bookplate below from around 1750 maintains the now classic Univ martlet coat of arms, but is notably sober in its presentation. In use during the Mastership of John Browne (who has his own peculiar history with bookplates – see Univ’s “heir loom”), perhaps this design was a response to the turbulent period of Univ’s history, when the college was torn down political lines amidst a power struggle between two rival masters, William Denison and Thomas Cockman. Rather than showing off, perhaps this plate represents a college that has returned to a state of order and stability. 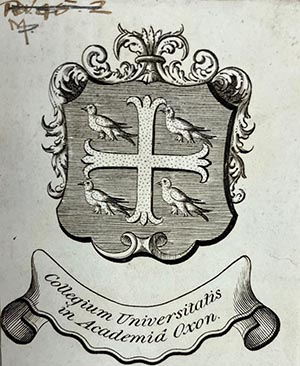 There are two very similar bookplate designs (below) dating from around 1800, both sporting a streamlined and rather elegant roundel design that the college has retained to this day. With a radically re-worked design that integrates text into the logo, and options in both white and grey, this may be Univ’s first earnest foray into graphic design.

Our design below dating from around 1860 is a marked change in tone, elevating the college’s self-identity from one of earnest hard work to ornate extravagance. It is a product of its time, with a technically marvellous engraving that typifies Victorian craftmanship and finished with dramatic Gothic lettering.

James Sutton, old Member (matric. 1948) and designer of our 1968 design, writes that the Victorian bookplate holds for him “a horrid fascination (quite appropriate to the library itself), and it looks as if it ought to be printed in full colour with a shiny surface and the highlights in gold… the design jumps at you from the page” [2]. 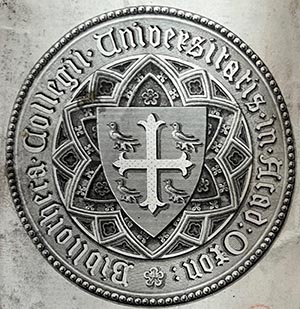 The design in use from 1940 does away entirely with pictorial interest, and is a simple rectangular plate that rather austerely states the library’s ownership (see below.) Authoritative, if a bit cold, this design said little about the college’s character, and may tip into stereotypical librarian sternness. At the very least, this plate makes clear that Univ values its book stock. The design prevailed for more than 30 years. 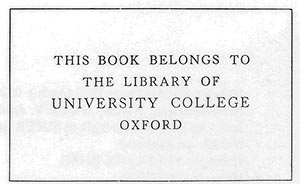 From the second half of the 20th century, we have a clearer idea of the Library’s history and the personnel that took charge of it. In 1968, Peter Bayley, in his capacity as College Librarian, commissioned a new design for the Library’s bookplate. He employed former student James Sutton (above) to produce a new design. Sutton had vivid memories of encountering the stark “notice in four lines of caps” of the 1940 plate, which, in his opinion, carried a “threat of retribution … in its very decent matter-of-fact dullness” [3].

Sutton aimed to equal the previous plate’s clarity while making something “pleasanter looking [and] identifying the books’ ownership less magisterially.” The resulting design (below) is much more laid back and, while clearly marking the book as Univ property, gives the impression that borrowing is welcome rather than a grave infraction of Library rules. 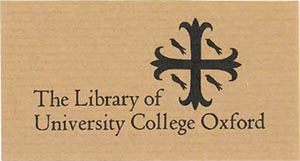 Sutton gives the college coat of arms a slight make over, paying special attention to the all-important martlet feet. He explains that, as the lack of feet is integral to the allegory of the industrious bird, he has logically left off both the feet and plumed legs [4].

The 1968 plate was in use for 43 years until, in 2011, Univ’s out-going Librarian Christine Ritchie commissioned a new bookplate as a parting gift to the Library following 26 years of service. The bookplate artist Gordon Collett was asked to produce the new design, with a brief that he should celebrate the Library’s Victorian architecture (the building was designed by architect George Gilbert Scott). Univ’s Old Library building was completed in 1861, and the new bookplate celebrated 150 years since it was gifted to college by the second Lord Eldon. 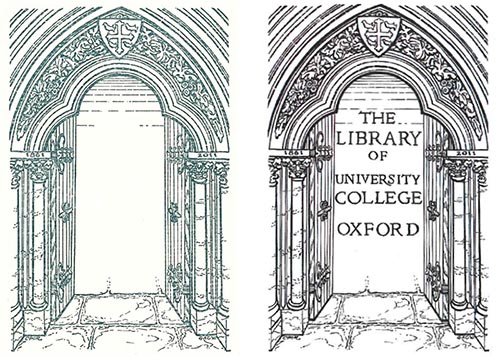 The left-hand version of the two 2011 plates is used for books donated to the Library, so that the donor’s name and connection to College can be noted. A line drawing was essential for these donation plates, as College Librarian Elizabeth Adams prints them herself at her letterpress studio. The right-hand version, with the Library’s ownership once again stated magisterially in block capitals, is stuck into all other acquisitions.

Our 2011 plate, still in use after 11 years, depicts the entrance to the Library with its doors wide open. The college has a well-earned reputation as a friendly and welcoming college, and our bookplate elegantly emblematizes our college character, as well as our delightful Library. Just beneath the archway, the years 1861 and 2011 commemorate the anniversary, while the martlet coat of arms stands proudly above the doorway, welcoming our dedicated and hardworking college members.

Univ’s Library has over 200 manuscripts…