Univ’s Library has over 200 manuscripts, a collection that has built up since the earliest years of the College’s existence. This month’s Treasure takes a closer look at MS. 26 and MS. 41 (see Figures 1 and 2 below), both produced during the late 14th and early 15th centuries. 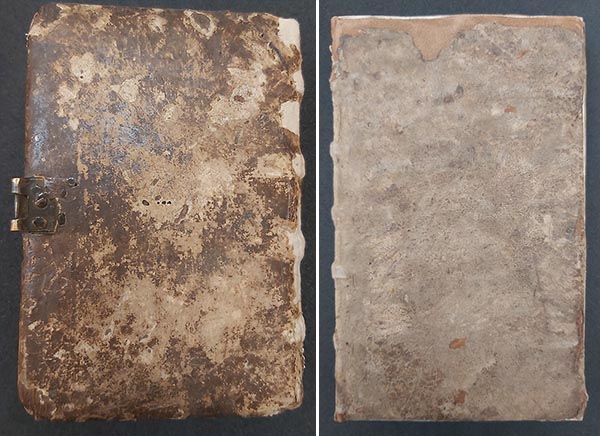 The books contain treatises in Latin on astronomy and arithmetic that were studied at universities in the medieval period. Undergraduate students in those days studied the Trivium and Quadrivium, which comprised the seven liberal arts, and the Natural Philosophies. The breakdown of the course looked like this:

In those days, books were relatively few in number. Manuscripts took time to produce because they were written out by hand. There was also no Blackwell’s where you could pick up copies of your core reading. Instead, undergraduates attended cursory lectures, so-called because at them texts by the important authorities for each subject were read out, explained, then discussed and debated. It is very likely that our two manuscripts were used for teaching, either at Oxford or elsewhere.

One of the authorities in MS. 26 is Johannes de Sacro Bosco, who taught at the University of Paris. He is best known for his treatises on the universe and numbers, the latter reputed to have introduced Arabic numerals into western learning. Sacro Bosco wrote these works in the first part of the 13th century: they quickly became essential university reading and remained so for several centuries. 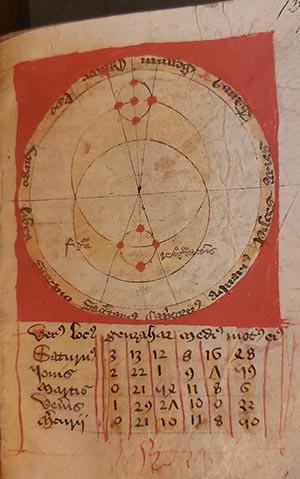 The copies of Sacro Bosco’s work in MS. 26 was made nearly 150 years after his death which shows how influential he was. The rest of the book comprises important treatises on arithmetic and astronomy. There is not just text: there are diagrams showing the arrangement of the universe and tables for calculating the positions of the planets (Figure 3).

Some of the texts in MS. 26 are signed “Hatfield” (Figure 4, below) which is probably John Hatfield, a scribe and monk who lived at St Alban’s. He would have copied texts from existing codices kept in the library of his monastery. As mentioned earlier, it was through copying by hand that texts could be disseminated. This was time consuming work and not only explains why copies were few in number, but also how important the scribe was in the process of transmission and dissemination. Other interesting features of this manuscript are the remains of a metal and leather clasp for keeping it shut (see Figure 1, above), and that it contains lots of scribbling and illustrations in the marginalia (see Figure 5, below). 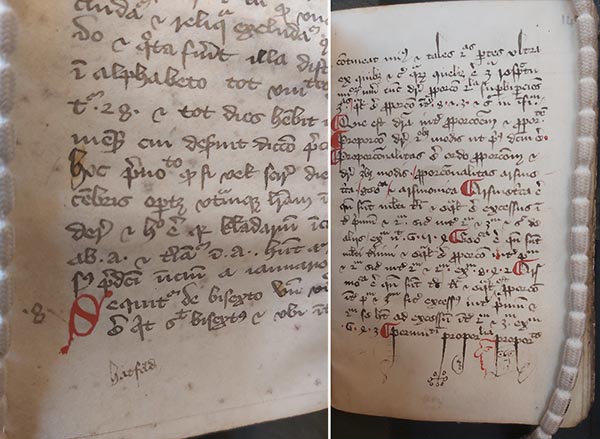 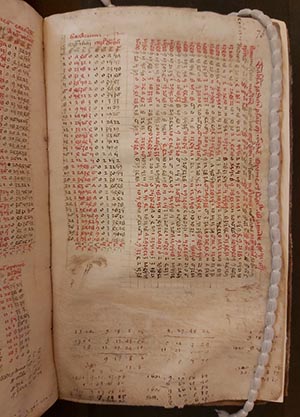 MS. 41 also contains several important astronomical texts, and includes tables that were used for studying the planets. The one seen in Figure 6 is known as an “Alphonsine Table”, used to determine the position of the planets, sun and moon throughout the course of the year. Like all the treatises in these manuscripts, Alphonsine tables assumed the earth was at the centre of the universe, a theory that held out until the 1550s, when Copernicus showed that the planets in our solar system orbit around the sun. In addition to the Alphonsine tables, there were helpful charts for calculating where the sun would be in London, Oxford or Exeter at any particular time.

What do we know about how these books came to be in Univ Library? MS. 26 has been in our collection since June 1670, when it arrived as part of a gift of books from William Rogers (matr. 1663). His gift included the famous Bede manuscript, MS. 165 (See previous Treasure, Life of Cuthbert by the Venerable Bede). Rogers’ distinctive signature can be seen on in several places (e.g. Figure 7, below), but the book bears no clues about who owned it before Rogers. 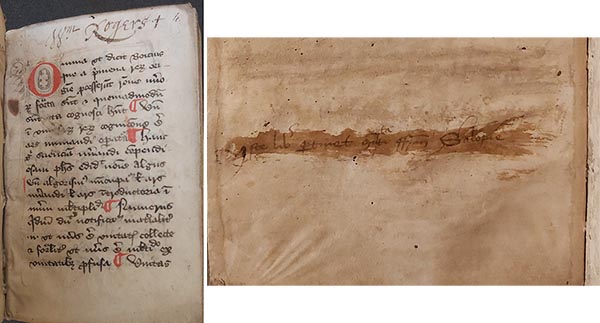 The inscription you can see in Figure 8 (above) is near the front of MS. 41. is very abbreviated, something medieval scribes did, but it says that the book belonged to “Ffratrum Salopiae.” This refers to the Franciscan convent that was in Shrewsbury (“Salop” is the old way of referring to Shrewsbury and Shropshire), and this suggests that before the book came to Oxford it belonged to them, and might well have also been made there.

These two manuscripts show us how people studied and taught in the medieval period, and how important scribes and books were for disseminating knowledge. Looking at them closely, trying to understand their contents, and how they were made also give us an opportunity to look back 500 years and see how practices, beliefs and understandings of the universe have since changed.

This month for our treasure…