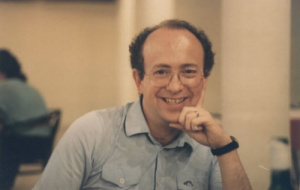 Professor Chris Pelling in the 1970s

Professor Chris Pelling, Honorary Fellow as well as former Fellow and praelector at Univ, who moved to Stavs in late 1974, and Dr Alex Johnston, who moved into his Stavs flat in September 2019, tell us more about their experiences of Stavs.

Professor Chris Pelling
Chris Pelling came up to Balliol in 1960s, where he held a scholarship. Before returning to Oxford he was a Junior Research Fellow at Peterhouse, Cambridge, and he became Fellow and Praelector in Classics at Univ in 1975. In 2003 he became Regius Professor of Greek at Christ Church.

It was all so new then. It was early October 1974 when Margaret and I, still fairly newly-wed, moved into Stavertonia, as everyone then called it. We had the apartment at the bottom of Bennet. This had originally been planned as the caretakers’ flat that it later became, but the building of Stavertonia had caused such a financial crisis that the caretaker could not be afforded: hence the opening for Pelling and Pelling.

Our Cambridge flat had been unfurnished and we’d asked if we could therefore bring our own furniture, fairly tatty though it was. That was an early sign of Univ’s friendliness: it couldn’t have been the most convenient thing to put its own furnishings into store, but they immediately agreed. “They” were in fact “she”, Dorothy Shock, the wife of Maurice Shock who had played such a part in the building’s origins. This was another welcome change from Cambridge, where our college rental had been organised by a rather impersonal agency, one with which we’d had the odd heated moment. Dorothy was now in charge of the daily running, and in the absence of that caretaker had plenty to do.

We were, of course, broke, so it was just as well that the rent was very reasonable. It was the early days of credit cards, and our survival policy was robbing Barclaycard to pay Access: when the payment was due on one card, take out enough on the other to pay it. It didn’t help that Fellows and lecturers were then paid three months in arrears, though Gordon Screaton was an understanding estates bursar and in extremis would authorise an advance. Those extrema came rather regularly.
It was a very pleasant flat, with a large L-shaped kitchen-cum-living-area and two bedrooms. It was large enough to entertain, and we held dinner-parties combining my Univ pupils and the Physics students that Margaret was teaching at St Hilda’s College: these had mixed results (alcohol, more than would be counted good tutorial practice today, helped at least the hosts), but the match-making was not a total failure.

We soon got used to the idiosyncrasies of the building, as so many have had to since: the feeble washing-machines; the lack of vertical soundproofing (the rather energetic graduate above us was into Canadian air-force exercises, quite the thing at the time); the rather qualified degree of privacy. The living area offered a large picture window, but it was a picture the wrong way. It looked out on what would one day be a small lawn, but these were early days and it was not a thing of beauty; on the other side was the path cutting across to the Woodstock Road, so convenient to students but less so for us. Young tutor as I was, I thought it might harm my authority to be seen watching Top of the Pops; a few years later I would have realised how much it would have helped my street cred. Still, of course we had more privacy than those in the student rooms, so open to the gaze of those living directly opposite. That feature, like those cute shared bathrooms and the lack of student kitchens, doubtless owed something to the Fellows’ failure to foresee that within ten years Univ would be mixed; the Head of House, Lord Redcliffe-Maud, was strongly against it, and the Fellows showed more deference to their Master than I always witnessed in the years to come.

We enjoyed the year there very much, though it was a tense one. I was not a Fellow, but a lecturer carrying the tutorial load until the Fellowship could be advertised, and there was no particular likelihood that I would be appointed. There were not many jobs in the seventies, heavyweights were bound to apply, and I was just 26 and in my first teaching job. It could easily have felt like an extended interview, though the Fellows were remarkably good at making me feel at home. I soon knew that I would give anything to stay. I was lucky, and did. 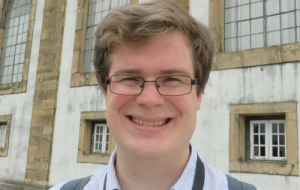 Dr Alexandre Johnston
Alex Johnston came to Univ in 2019, having completed a PhD at the University of Edinburgh in 2017 and holding a postdoctoral fellowship at the Scuola Normale Superiore in Pisa. Alex’s research focuses on the relationship between humans and gods in ancient Greek poetry and drama.

I first arrived in Stavs in September 2019, a few days before starting as a Junior Research Fellow at Univ. My first impressions weren’t ideal: there had been a mix-up with dates, and I found myself key- and card-less, standing in the pouring rain by the Lodge with all my suitcases. Fortunately, I was rescued by Angie Carter, who kindly found me keys even though it was long after hours.

Things got better as I entered the flat and realised it was quite a lot bigger than expected, with a rather pleasant retro feel: to me it felt like entering a 1970s time-capsule. I especially love the large windows with varnished wooden boards, which make a wonderful stand for records, books, and plants. I was also pleasantly surprised when the sun came the next day and I was able to explore the local area, with its impressive Victorian architecture, and the grounds themselves, with the rose garden and lawns. It was, however, a bit of a shock to find after two weeks that my new shoes had been completely worn down by the daily walk down Woodstock Road to Univ.

At the time, of course, there was hardly anyone there, and it felt like a big change when the students all arrived in October, and I found myself being asked if I was a second- or third-year by friendly young people carrying cardboard boxes with their parents. The situation improved even more when my wife Felicity was able to join me. The flat turned out to be quite comfortable for a couple, and we made the most of our proximity to Port Meadow, the canal, and the University Parks in the two terms we spent there (before the pandemic curtailed our time in Stavs). We look forward to returning there in the hopefully not too distant future.