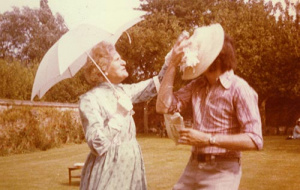 “These photos were taken in the garden of 25 Staverton Rd in 1973. The eight of us who were living there had a summer garden party and invited Lady Redcliffe-Maud. She came dressed perfectly. When I complimented her, she said her hat would look even better on me and put it firmly on my head. She then insisted on a formal pose. Like everyone who knew her, I admired Lady Maud greatly and became very fond of her informal sense of mischief on this and other occasions.” 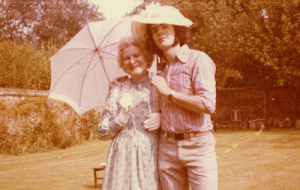 Professor Julian Disney AO (1970, Law) has been Director of the Centre for International and Public Law at the Australian National University and the Social Justice Project at the University of New South Wales in Sydney. He was awarded an Order of Australia for service to development of economic and social policy and to the law.

“Three postgrad students shared the comfort, peace and tranquillity of the attic flat in the old House. I lived in the large front room with a bay window looking out on to leafy and quiet Woodstock Road.

“After long days pursuing my clinical studies at the John Radcliffe Hospital, I could relax and concentrate on typing my DPhil thesis long into the night, though I usually met my housemate late at night for a therapeutic brandy and Café Crème cigarillo… Happy memories.” 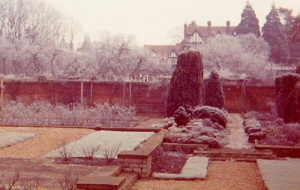 “I lived at Stavertonia for a year from 1976 to 1977. I was fortunate in having a ground floor room looking out on to the gardens so there was always a sense of space and of the changing seasons.

“One of my strongest memories is of learning, by trial and error, how to produce a three-course meal for six in the very small kitchen area. These meals were often followed by long discussions. I also remember long sessions at my desk grappling with the increasingly complex mathematics required for my Physics course and more relaxing interludes as I practised playing my guitar.”

David Vaughan (1974, Physics) retired from Shell in 2016. He was on the committee of the Physics Society and a “Nightline” team leader.

“If things had gone according to plan, we wouldn’t be talking about Stavertonia at all. Sometime around 1972-73, the College announced a competition for a name. I have no idea who submitted entries, though I do recall that the Dean (Leslie Mitchell) said that he was taken by the suggestion of ‘Mitchelldene’. In the end, however, the College announced that there was no winner and that Stavertonia would continue as the name, a decision that, as I recall, was met with general surprise and disappointment.”

Dr John Dunn (1968, BA & DPhil Modern Languages), is an Honorary Research Fellow (School of Modern Languages & Cultures) at the University of Glasgow, where he was formerly a Lecturer in Russian and Polish. 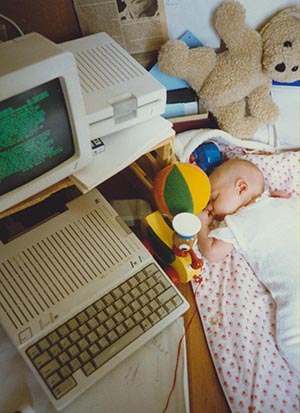 “When my wife and myself moved into the married flats in Staverton Road in early spring 1986, we started to knock at the neighbours’ doors. An impatient ‘Come in’ came in response from behind one door. In front of us stood a huge Sikh gentleman, wrapped in probably half a dozen blankets, equipped with a hot water bottle and a huge cup of hot tea, grumbling furiously about British climate conditions. We soon became friends with him, a journalist who had received a Reuters Scholarship for covering violence against Sikh communities in India.”

“This is a picture taken in a study in one of the married flats in Staverton Road. It shows my eldest son (Alan) who was born in the John Radcliffe Hospital in Oxford in June 1986, who had his place next to one of the earliest portable computers, an Apple IIe. It took a very large bag to transport it (the computer that is).”

Dr Andreas Poensgen (1983, Politics), a former Rhodes Scholar, is co-owner and managing partner of Turgot Ventures. He spent 20 years at Boston Consulting Group, at the end as Senior Partner and CEO in Switzerland.

“Staverton Road holds many happy memories of my time as a second year undergrad. Not only did it give me an opportunity to discover the delights of North Oxford, it was a perfect space to socialise and relax away from the buzz of the city centre. Nothing quite compares to idyllic weekend garden parties in the haze of Trinity term.”

Isobel Rose (2014, Music) is Assistant Director of Music and Chorister Tutor at New College School, Oxford. In 2016 she was a recipient of the Univ Mendl Schrama Music Prize. In 2018 she founded the Korrigan consort, an Oxford-based female vocal consort.

“My wife Anna and I were offered the top flat in 102 Woodstock Road, and we lived there for 1970/71. For a young married couple to have such a large and well equipped flat, in such a great location, was a privilege. The large lounge looked out over Woodstock Road and the bedroom looked out over the gardens to the rear. My wife thinks the rent may have been £3 7s 6p, but the bursar apologised as he had to increase it to £3 10s.

“We were very grateful that the College offered us this accommodation in Woodstock Road. It was a wonderful peaceful area to live in. We could not have lived anywhere better, and have happy memories of our year in Oxford.”