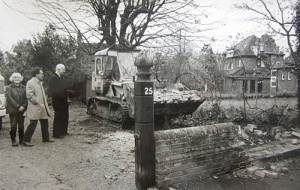 Stavertonia (“Stavs” to today’s students, “Stavers” to those of an older generation), our North Oxford annexe, has been a major part of Univ life for almost fifty years, and has now become the nucleus of our great “Univ North” project. But how did we acquire that property in North Oxford in the first place? For example, I have had people tell me that they were sure that we had owned the land since medieval times. The truth is not quite as dramatic as that, but it’s still an interesting story, well worth telling.

After the completion of the Goodhart Building in 1962, Univ’s central site could accommodate two years’ worth of undergraduates, but our finalists and postgraduates had to live in digs, and there was no accommodation for married students. Early in 1965, therefore, a Committee was formed to discuss what to do

Two options presented themselves, based around Univ’s existing housing stock. First of all, there was the so-called “Banbury Road Triangle”. This covered 14–36 Woodstock Road, the Old Parsonage Hotel, and 7-19 Banbury Road. This proposal had the advantage that it was near the College; that we owned a great contiguous piece of land; and we had a whole lot of existing properties which could be adapted.

The alternative proposal lay northwards. Back in 1953, we bought 104 Woodstock Road for £8,500, to be converted into flats to be leased out commercially (we bought several Oxford houses around now for this purpose). Two early tenants of such a flat were our former Master, William Beveridge and his wife – but they were not easy tenants: recently-discovered papers show them regularly complaining to the Bursar about noisy tenants, or undone repairs.

Then, in October 1958, we spent £6,950 on purchasing 25 Staverton Road, next door to 104 Woodstock Road. Once again, though, we just leased it out commercially.

That might have been that, but in the mid-1960s the College, and in particular our then Estates Bursar, the late Maurice Shock, seems to have looked at our North Oxford properties in a new light. They were further away from Univ than the Banbury Road Triangle, but the College might buy adjoining properties, and new buildings could be erected in the large North Oxford gardens. Furthermore, converting the Banbury Road houses to student use might prove difficult.

In February 1966, Shock wrote a memorandum about College accommodation, and recommended the Staverton Road site for our new annexe. He had just had a stroke of luck, in that in November 1965 the College had agreed to buy 102 Woodstock Road for £18,500 (the purchase was completed in May 1966).

Shock went one better in the summer of 1966, when he bought 100a Woodstock Road for £35,000. This was an expensive purchase, to be sure, but Shock now had a nicely expanded but contiguous site in north Oxford.

In early 1967 the Fellows agreed to erect their new annexe in Staverton Road, and the architect (and Univ Old Member) Sir Philip Dowson was appointed to the project. Meanwhile, later that year, the College sold 7–19 Banbury Road and 14–36 Woodstock Road to the University, in part exchange for 12 Merton Street and a cash payment of £84,365. 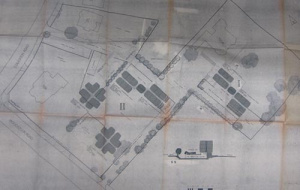 Early version of plan by Sir Philip Dowson, May 1968

We show here what appear to be Dowson’s first thoughts for Stavertonia from May 1968. Even if the precise footprint of the buildings changed, their basic disposition is recognisable, with four new buildings, later to become Greenwood, Bennet, Skirlaw and Percy. 100a and 104 Woodstock Road and 25 Staverton Road are also visible, but 102 Woodstock Road is not. In a planning application from July 1968, the College portrayed 102 Woodstock Road as riddled with dry rot, and only capable of longer life if large sums of money were spent on it. Thus, 102 Woodstock Road was demolished. And in case readers were wondering, 100a Woodstock Road will be familiar to them as Redcliffe-Maud House.

During all this planning time, our four properties were not empty: they had all been split into flats, mainly for student use, and I’d like to hear from Old Members who lived in any of these houses in the late 1960s, especially 102 Woodstock Road. 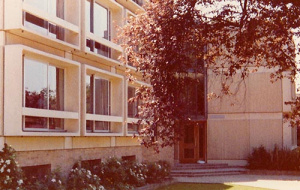 This project was a daring one. Today we are used to Colleges having separate “annexes” in other parts of Oxford. But in the later 1960s this was very novel. Balliol had begun to develop the area around Holywell Manor, and in 1971 Queen’s completed the Florey Building, just off St. Clements, but these were pretty much the only comparable developments. Stavertonia was a pioneering project.

Significantly, though, our ambitions for North Oxford were not quite complete. In 1968 we purchased the freehold of 119 Banbury Road and land at the rear of 117 Banbury Road for £52,500 – all just to the east of Stavertonia. However, rather curiously, we sold it almost at once, subject only to our keeping an alleyway linking the Stavertonia site with the Banbury Road. Instead, we sold the property to developers and it is now the apartment block known as Thackley End.

So much for our plans. Turning them into reality was not without controversy. Local residents expressed unhappiness about the threat of noisy students, ugly new buildings, and the demolition of 102 Woodstock Road. Eventually the planning application went right up to the Ministry of Housing and Local Government, where an enquiry was held in 1968. Fortunately, the enquiry recommended approval of the project. 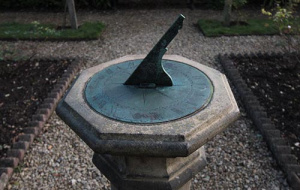 Sundial in the Rose Garden at Stavs

Not everything was settled: the height of the new buildings proved controversial, and in March 1970 our original designs for Bennet and Greenwood were rejected. Nevertheless in November 1970, work at last began.

The difficult story of the erection of Stavertonia, when a set of buildings which it had been estimated would cost £400,000 in fact cost £1,000,000, is for another day. But for now, I hope that this short piece has offered some explanation for how we ended up with our annexe in North Oxford – now so greatly expanded.

We have experienced superb…