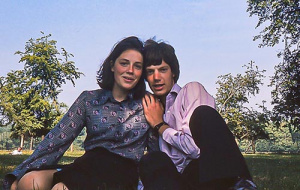 Earlier this year, as we prepare to bid farewell to Stavertonia and say hello to Univ North, we asked our Old Members to send in postcards telling us about their memories of Staverton Road. One reply in particular stood out: Steve Hasler (1973, Chemistry) told us he actually proposed to his then girlfriend, now wife, while living there.

Firstly, can you share some of your memories of student life?
I remember my interviews well. I really enjoyed the Chemistry interview; it stretched beyond school content, and simply got me to apply the principles. I could feel it was going well.

However, the amusing one was the non-chemistry interview with George Cawkwell. He asked me to tell him about a book I had read recently, and, in an attempt to impress, I mentioned Rosencrantz and Guildenstern are Dead. He asked me to tell him more about it, and I was panicking. Then the phone rang and he was distracted. When the call ended, he asked me what we were speaking about, and I said quickly: “The news!”

I also remember the camaraderie. I lived at 90 High Street and shared with a classicist. I became good friends with the chemist and engineer who lived next door, and the engineer and English student who lived on the floor above. The five of us went through university as a group, picking up a couple more friends along the way.

The engineer next door had built a set of enormous speakers and had brought them with him at the start of our first year. The call to gather to go to formal Hall was Born to be Wild by Steppenwolf. At one point the Chemistry tutor from two floors down knocked on the door and said, “I can’t hear your music, but I sure can feel it.”

What was your time at Stavs like?
When Stavs became an option in our third year we grabbed a sixth person and made our bid for a flat. We got one on the first floor at Bennet. We shared the cooking, each of us organising one day a week. It worked an absolute treat.

Sometimes for lunch, if we weren’t in labs, there would be three or four of us in the flat. I remember that we would loll about on the floor in the corridors while we ate.

You mentioned that you proposed to your girlfriend there…
Judith read Physics at St Anne’s College. We met fairly early on in her first year. I proposed to her one evening in my room at the end of my third year — the summer of 1976. We graduated the following year and married in August of 1977. She became an accountant, and I began my career in pharmaceuticals.

The picture on the postcard you sent looked like the view when I proposed to her.

Can you tell us a bit about your life and career journey since leaving Univ?
I was in pharmaceuticals for 33 years. I joined Beecham Pharmaceuticals after leaving Univ. Over time the company evolved into today’s GlaxoSmithKline. I essentially worked for three different companies and I got to move around the country. I then ended up in research and development, but in management, not at the bench.

From 2010 I spent four and a half years in consultancy. I worked for four or five of GlaxoSmithKline’s major competitors. It was amazing, I really enjoyed it, and got to see what it would have been like to work for them instead.

Now I volunteer my time for lots of different things. Most of my time for the last two and a half years has been running front of house as a volunteer at Saffron Hall. It is a world-class classical concert venue in the town of Saffron Walden; we host world-class performers including the London Philharmonic Orchestra.

I was also a church warden, at a Grade 1 listed church, and was involved with building works there. I now volunteer as an advisor, helping others with building changes in their church. I am also currently a trustee for the local almshouses which provide housing for those in need.

What impact do you think Univ had on you and your future?
Univ sorted out the rest of my life in all sorts of ways! Having an Oxford degree brings opportunities and I had several offers when I left. I chose pharmaceuticals, which was a relatively new field.

I didn’t know anyone in pharmaceuticals, but I could see it was somewhere I could use my degree. I clearly landed on my feet because pharmaceuticals has been very successful.

What would your message be to anyone just about to start at Univ?
Make the most of it. Do things you wouldn’t have thought about doing and take in the experience. Go with the flow and don’t miss out. Oh, and study hard!

By “ambitious” what I really mean is that Univ was always thinking about its place in the tables and was always looking to make itself known. The College is constantly striving for excellence.

When I say “eccentric”, or perhaps “characterful”, there’s a story to this. The head tutor for chemistry in my day was John Albery. We all used to try to get the 6pm tutorial slot, it was before hall, and you were almost guaranteed a gin and tonic up in his penthouse at the top of the Goodhart Building.

I also remember Univ were in the Cuppers’ final, and he drove us there in his open top sports car. The tutorial was carried on at the cricket match, but also in the car all the way down the High Street while he was driving. I was more worried about whether he was watching the road than about what he was asking!

As we continue to look forward…