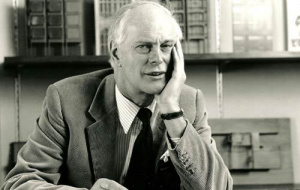 Back in April 2007, while at work on my history of Univ, I invited Sir Philip Dowson of Arup Associates, the architect of Stavertonia, to lunch for an interview. Sir Philip was an Old Member of Univ, and his sister Aurea married our former Classics Fellow, Freddie Wells, so he was delighted to visit Univ once again. Our conversation ranged over many subjects, but for now I am setting down some notes of his memories of designing and building Stavertonia. 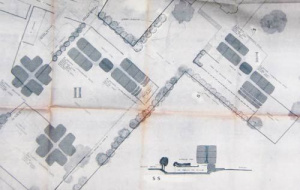 The first plans of Stavertonia (1968)

Stavertonia was not his first project for Univ, because he had submitted designs for what would become the Goodhart Building. Sir Philip’s design lost, and, sadly, our archives have no drawings for it. He was encouraged in this project by Peter Bayley (English Fellow 1947-72), and did wonder whether Peter had persuaded the College to have him design Stavertonia.

As Sir Philip remembered, his main brief was that the College wanted a building in which to put people up to stay. It was not intended to be too grand (no private bathrooms), and rooms should be arranged in groups for friends to live together. He envisioned a large central space in each floor to have cushions to sit on, say. 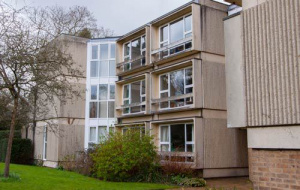 Sir Philip liked having the floors at half levels, so that people would feel much closer to every level. He also liked the horizontal/vertical effects, with no stratification. Because people would spend time in kitchens, he wanted them in the middle. Sir Philip admitted that he was asked to create Stavertonia on a tight budget. The best thing to do was to build each structure as simply as possible. He liked the big windows – it was a good feeling, he thought, to feel some translations between the internal and external. He didn’t like walls which felt as if the windows had been put in like holes in a piece of cardboard. So he worked to a simple unit for Stavertonia, with the window seats there to make one enjoy living on the edge. He also hoped that the roofs would be terraces.

I did politely make one point about Stavertonia to Sir Philip. For one year I lived in the side of Bennet Building directly opposite Percy Building, so that everyone in each building could see each other (and their doings) perfectly, and I admitted that I didn’t like it. Sir Philip’s answer was robust: one puts up with this in towns. Does it matter? I took his point of view, but am not sure that I agreed! 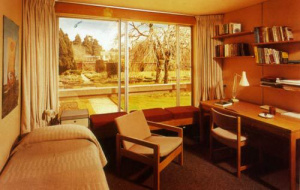 A typical room in the Staverton Road annexe

Sir Philip had designed several buildings for student accommodation in both Oxford and Cambridge, and, as I look back on these notes, it comes across how much he enjoyed the challenge of creating worthwhile and interesting accommodation, even when faced by financial constraints or (occasionally) an over-interested Governing Body.

As we continue to look forward…