A “small performance about Comets” 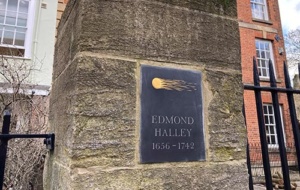 This month’s treasure features Edmond Halley’s Astronomiæ cometicæ synopsis (Browne O.I.13), a work only discovered a few years ago as it has been bound with another astronomy text; David Gregory’s Astronomiæ, physicæ & geometricæ elementa (Oxford, 1702). An almost contemporary text from 1705, Halley’s short pamphlet has been bound behind Gregory’s work.

Gregory was a Savilian Professor of Astronomy, a position which Halley was not awarded, possibly due to professional jealousy from the Astronomer Royal of the time, John Flamsteed. Astronomy and Geometry had been identified as underrepresented fields of study by Sir Henry Savile, who created both positions in 1619. Halley became a Savilian Professor of Geometry in 1704 and you can still see the pair of houses on New College Lane that were reserved for both Professors. A plaque now commemorates the site (Fig.1, above) and Savilian Chairs in Geometry and Astronomy are still appointed by New College over 400 years after the scholarships were founded. 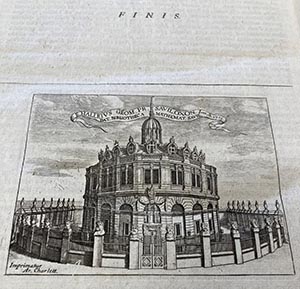 The link to Univ comes with the text’s publication history. The pamphlet was commissioned by Arthur Charlett, the Master of Univ from 1692 until his death in 1722. The engraved publisher’s device bears an image of the Sheldonian Theatre, which housed the University’s printing presses at the time, before work on the Clarendon building began. Charlett’s name appears in the bottom left-hand corner, with the author and title of the work engraved on a banner above the image.

Dr Robin Darwall-Smith, in his history of the College, observes that Charlett was “from 1694 a Delegate of the University Press. In the latter post especially, he revealed an energy shared by few of his colleagues. He was eager to publish new works, and also market them, regularly circulating leaflets listing the Press’s publications.” (Darwall-Smith, pp.224-225). The Astronomiæ cometicæ synopsis is one of these works and it appears that Halley and Charlett worked closely together on the publication.

After Charlett advocated to the University that the house for Savilian Professors should be in a better condition, Halley seems to have considered Charlett a patron.  Halley’s letter to Charlett survives, thanking him for his help: “I return to you many thanks for your repeated favours as well in what relates to my house, wherein I must esteem you my greatest benefactor, as for your kind endeavours to give reputation and value to my small performance about Comets.” (MacPike, p.125) 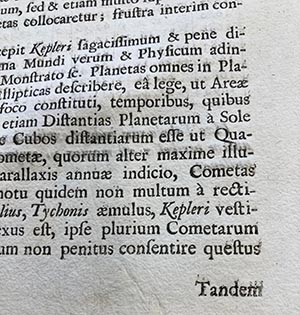 In the same letter, Halley thanks Charlett, his publisher, for sending on 10 copies of the pamphlet. In the same breath, he requests more copies as he’s not happy with the quality. He observes that Charlett’s printer “did not take care to wipe his fingers as he ought.” Any resulting major smudges are not visible in the Univ copy, although the printing is slightly imperfect (see Fig.3) and Halley was clearly keen to be in possession of pristine copies.

In Astronomiae cometicae, published in Latin, Halley makes the observations about the comet that was to be named after him. It contains detailed tables (Fig.4, below) supporting Halley’s theory that comets in our solar system move in elliptical or parabolic orbits. Although these may be difficult to decipher without a background in Astronomy, one of the tables has a note stating “This table needs little explication, since ‘tis plain enough from the titles, what the numbers mean” (English translation, 1705).

Was this Charlett’s personal copy, later filed away with another text on Astronomy, made by Halley’s colleague? When and why was it bound with Gregory’s work? Was it left in the Master’s lodgings after Charlett’s death? The handlist for Charlett’s successor, John Browne, catalogues Gregory’s text but makes no mention of the Halley. Browne’s collection features many of Charlett’s books, where the bookplate of the latter has been covered up with Browne’s, a topic explored in our previous treasure Univ’s “Heir Looms”.

By 1721 Halley had left Oxford for Greenwich to take up a post as the Astronomer Royal, a role created by Charles II. He was the second astronomer to take this position (after the death of Flamsteed) although his position as Savilian Professor of Geometry continued until his death in 1742. The Astronomiæ cometicæ synopsis provides a fascinating insight into Halley’s calculations regarding comets by the time he was living in Oxford. We now know that Halley’s comet appears every 74-79 years. We will have to wait until 2061 to see it in our skies again!

Halley, E A synopsis of the astronomy of comets; translated from the original, printed at Oxford (London, 1705)

To put us in the mood for Christmas…

We’re putting out a call…

In this month’s Treasure…