For this month’s Treasure we’re putting out a call for information about a mysterious recipe written in a 16th century hand on the flyleaf of a book by Hermann Bodius. We’ve never been able to determine with any certainty what the recipe produces. Perhaps a budding chemist or a fan of The Great British Bake Off will be able to help.

The image below shows the recipe as it appears in the book. The handwriting is in a style common in Europe from the early 16th century, called Secretary hand. Although it’s hard for the modern eye to read, in its day it was designed to be more legible and widely recognized across Europe than the style of writing used during the High Middle Ages. In this case, the hand looks to be from the mid-16th century, so must have been added very soon after the book was published in 1551. 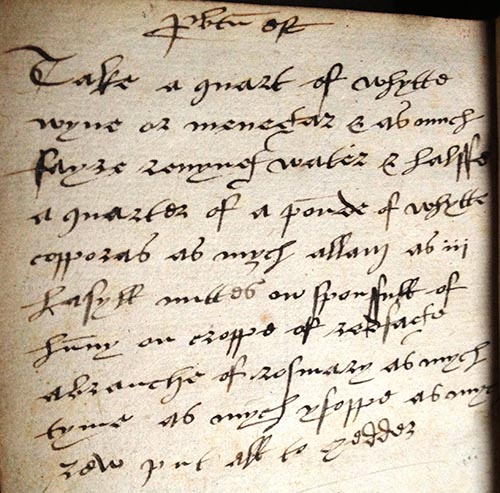 The recipe doesn’t have the usual title but is instead simply headed “Pbtu est”, a contracted Latin form of the words “Probatum est”. This translates directly as “It has been proved” so we can assume that whoever wrote the recipe was fairly certain that it worked. There are no other annotations within the volume, so we don’t have any clues as to the identity of the writer.

Transcribed directly, the rest of the recipe reads:

Take a quart of whytte wyne or wenegar & as much fayre running water and halffe a quarter of a ponde of whytte copperas as much allam as iii hasyll nuttes one sponfull of hunny one croppe of redsage a branche of rosmary as much tyme as much yssoppe as much rue put all to gether.

The non-standardised spelling of English in the 16th century makes this hard to decipher but here is the list of ingredients you’d need on hand to make the recipe:

Although most of these ingredients will be familiar to home cooks or gardeners, the white copper and alum are probably less widely used. White copper, also known as cupronickel, was first developed by the Chinese who heated and then mixed copper, nickel, and saltpetre. This compound was mostly used in weaponry or coinage, so the function of white copper in this instance is unclear, although it would probably have been poisonous. During the medieval period, the word alum was used to describe several different chemical compounds, mostly containing aluminium and potassium. Alum had many uses, including as an ingredient to set dye, a pickling agent, a skin-whitener, and as a water purifier.

Many of us will be accustomed to using sage, rosemary, and thyme in our kitchens. Hyssop, less commonly used in modern times, is a herb belonging to the mint family that was traditionally used to treat nose, throat and lung afflictions. Rue, also a type of mint, has been used since antiquity as both a remedy and a protective charm. Its appearance in this recipe is notable as the herb is poisonous in large doses and should only be used externally. The appearance of the rue and white copper as well as honey in the same concoction has suggested to some that this might be a recipe for a poison, with the sweetness added to disguise the unpleasant taste.

Over the years that we’ve been exhibiting the recipe, suggestions have included scented ink, a hangover cure, or a sixteenth-century precursor of “Grecian 2000” (a kind of hair dye). So far, no-one has offered to make a batch for us, and we’re not sure what we’d do with it if they did! If anyone has any likely suggestions, please do get in touch.

In this month’s Treasure…