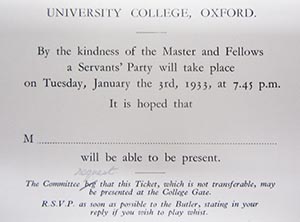 College Servants’ Christmas and New Year Parties from the 1930s

To put us in the mood for Christmas, let us return to the 1930s, and to a collection of correspondence files about the Christmas and New Year parties held by Univ’s servants between 1932 and 1937. These files were found in cupboards in the tower above Main Quad (only accessible by means of a ladder!), and we are lucky to have them. No other papers about such parties survive, and they offer a splendid opportunity to recreate the atmosphere of these events. These files take us back to a very different world, not least because this was an age when Colleges still employed “servants” and not “members of staff”.

The parties were usually held in the Hall just after Christmas, and were clearly important occasions. Preparations usually began in October with a big meeting: 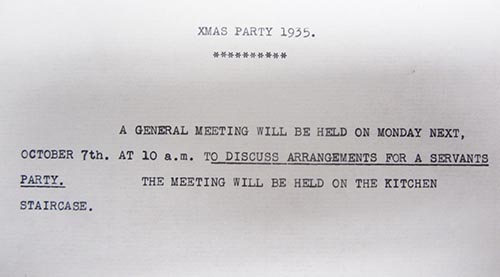 There were many things to organise: food and drink, of course, but also entertainment. This set of accounts for the Christmas Party of 1934 shows where the money went: 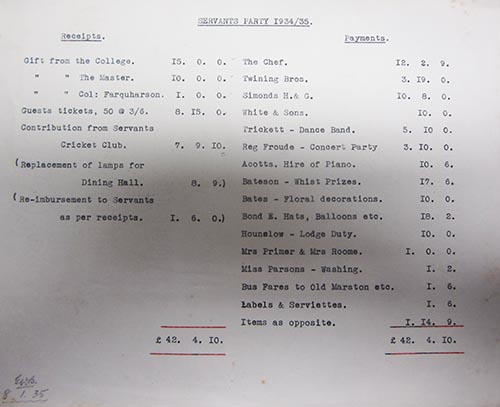 The largest payment went to H & G. Simonds, who provided the drinks. Note the prizes for whist: as seen on the invitation above, whist was a very popular feature at these parties.

You will see too how the parties were funded: the College made a significant contribution, but so did the Master himself, and A. S. L. Farquharson, the senior Fellow, known to all as “Farky”, always chipped in. The Servants’ Cricket Club also regularly made a contribution. Servants of course came for free, but were expected to pay for their guests.

Local companies were eager to seek the College’s custom. Here are some business cards from 1932 from hopeful caterers and entertainers: 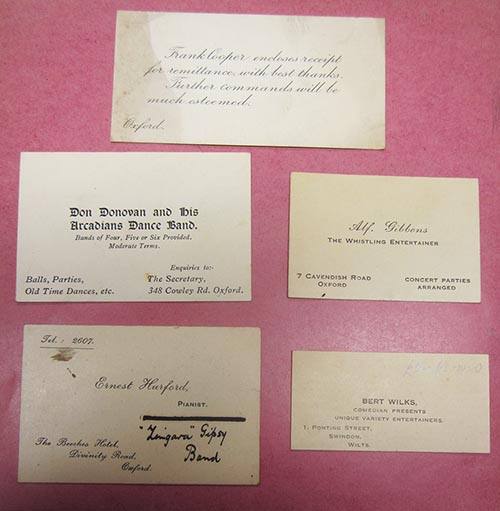 Almost none of these were engaged. Thus we do not know how Alf Gibbons, the Whistling Entertainer, might have been received.

It is interesting to see what entertainments were in vogue in the 1930s. Here is a letterhead from a remarkable duo, who offered a mixture of music, comedy, and magic: 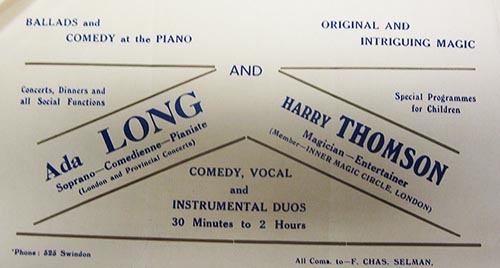 They were not engaged.

One entertainer, however, who was engaged was Reg Froude. Here is his letterhead, where he calls himself “The Comedy and Novelty Entertainer”:

Froude performed at several parties during the 1930s, which suggests that his brand of music and comedy went down very well with the partygoers.

Plants were specially hired to offer colour to the Hall:

There was food and drink, and smoking too. Here is an invoice from Twinings, who at the time were renting 83 and 84 High Street from the College, for biscuits, alcohols, and cigarettes and cigars (image below, left). And, below, right, is an estimate for the supper to accompany the party: 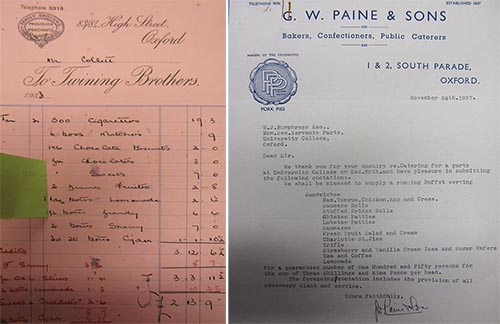 But above all there was to be dancing, for a dance band was always hired. Here are letterheads for some of the bands whom the College dealt with, often proclaiming their successes in competitions: 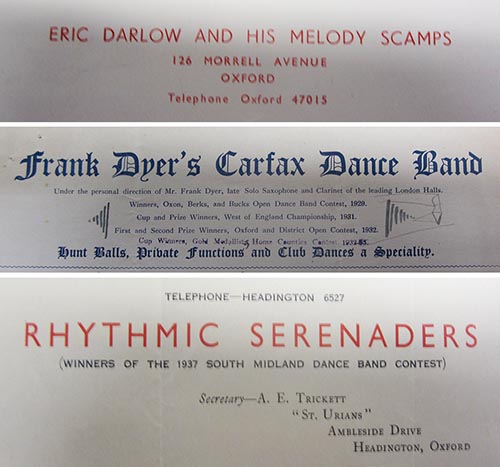 Frank Dyer and the Rhythmic Serenaders were certainly engaged more than once, and their letters tell us something of the size of the bands hired. In 1932, Frank Dyer proposed a band of saxophone, trumpet, piano and drums, while in 1934 and 1935 the Rhythmic Serenaders respectively provided a five-piece and an eight-piece group. We don’t know what music they performed, but we can guess that they performed many of the latest hits of the day.

The College’s servants even owned a special sprung dance floor to use on such occasions. Presumably it was made in sections for easy storage and transport.

You will have seen how almost all the catering and entertainment was provided by local companies. This tells us much about the vitality of 1930s Oxford. Sadly, however, none of these companies exist in Oxford today, and although Twinings still make speciality teas and much else, they have no shop here now.

The Master and Fellows were always invited to the Servants’ Parties, and the files hold many letters from them accepting or regretfully declining their invitations. Here are A B Poynton and “Farky” both agreeing to come along, as well as the Economics Fellow and great guru of the Labour Party, GDH Cole, who was unable to attend:

The files sometimes shed unexpected light on College life. Here, for example, is a letter from Mrs Poynton, the Master’s wife, in which she names the servants in the Lodgings: 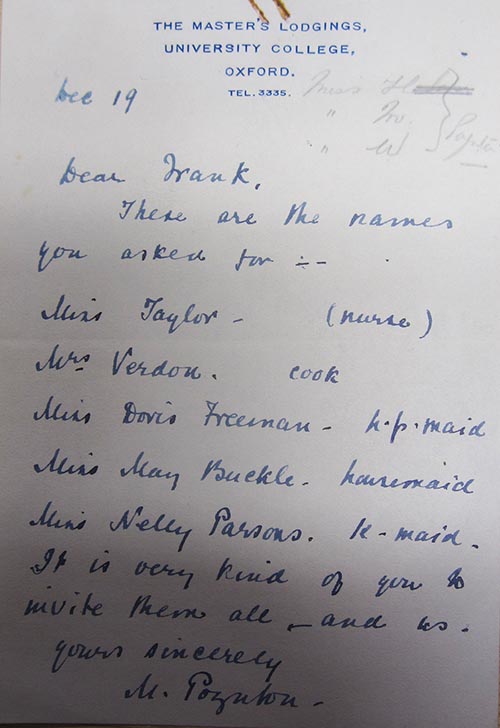 This might not seem much, but information on the management of the Master’s Lodgings is very hard to find, because the Master, and not the College, was responsible for paying his servants. So we have here one of the few complete lists of who was working in the Lodgings.

It would be fitting to end our trip back to the 1930s here, as we imagine ourselves donning our party clothes and releasing our inner Fred Astaire and Ginger Rogers to dance the night away, or else chortling at Reg Froude’s repartee (or even just playing some whist), but there is a sad coda to this month’s Treasure:

Here is a photo of the Chapel windows having wooden screens erected over them during the Second World War to protect them from possible bomb damage: 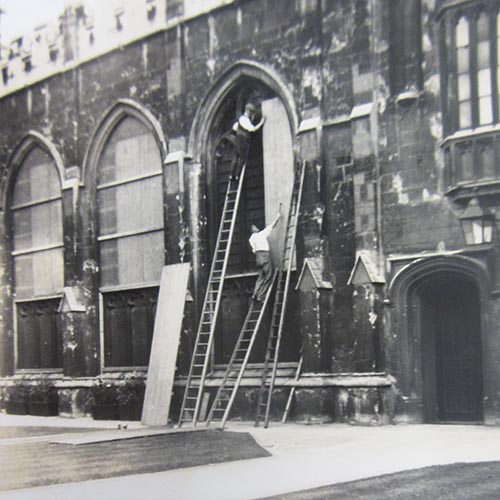 The wood for these screens came from that sprung dance floor specially made for the servants’ parties. Our former English Fellow, Peter Bayley, who had come up to Univ as a student in 1940, remembered that it was the servants themselves who offered to have their dance floor used in this way, and he always praised them for this sacrifice.

In 1927, in an early attempt to capture the coveted Christmas…