Women of the Future Award 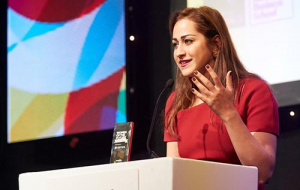 Dr Shirvani has previously worked at the Climate Policy Unit of the World Bank, the United Nations office in Iran, Citigroup and Deutsche Bank. Her articles on a range of energy issues have been published in The Economist, The Times, Foreign Affairs, Harvard International Review, New Statesman magazine, and Washington Quarterly magazine.

Dr Shirvani is featured in the Young Univ Gallery, which aims to demonstrate the breadth of the achievements of Univ alumni under the age of 35. In her interview she commented on her time at Univ:

“My biggest inspiration at Univ was my DPhil supervisor and Univ Fellow Sir David King, who was the Chief Scientific Adviser to HM Government under both Tony Blair and Gordon Brown and Head of the Government Office for Science from 2000 to 2008. Sir David always pushed me to go further in my research whilst trying to find technological solutions to the biggest challenge of the 21st Century: climate change.”