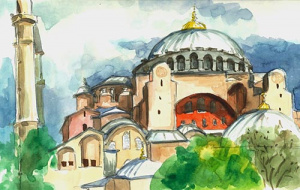 This trip was generously supported by the Roger Short Memorial Trust.

Breaking into the notebook feels strange as it’s so neat and new and white. But here we go…

My travels here were smooth. I flew with Turkish airlines and my mind was blown by the service and facilities. I guess it’s all thanks to me booking early. I got to the Ataturk Airport at 8pm and by 10 pm I was already in my room. The transfers were uite easy, although I have to admit I felt paranoid and unsettled on the 15 mn walk from the metro to my accommodation.

I made some day plans before getting here but I am quite flexible. So what’s the plan for tomorrow? Meeting with the Urban Sketching Istanbul group at the Miniaturk park. This park has miniature replicas of emblematic buildings in Turkey and while I think it will be a good intro and overview of architecture I would not have visited it otherwise. I don’t know this group. I just messaged them on Instagram and told them I will be around. I hope it will all be fine and I will be able to integrate for the day.

I had a pretty good time with Urban Sketchers Istanbul. They were all lovely and I wish I would remember all their names, but unfortunately I don’t. The coordinator greeted me and was super friendly. He is a survey engineer and his sister lives in London but he never visited. He was such a sketching geek: he recognized the band of my notebook from the cover only. Then I also met Cobra (pretty sure this is not how you spell her name but this is how she pronounced it) who is an architecture student and with whom I spend most of my sketching time. She told me about her travels to Italy to study architecture, and how she hopes to go back there for future studies. We also talked a bit about Istanbul and the life here, mainly using Google translate on our phones. Then there was a very sweet man who was a corporate trainer. He travelled to Oxford over the summer and he showed me some of his sketches from there. We chatted about his Oxford experience and he told me that his AirBnB host made a handmade sign and went out to protest Trump during his stay here. I thought it was hilarious! 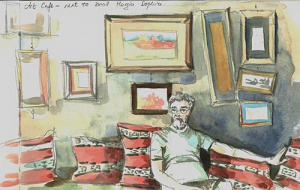 Overall I enjoyed the Miniaturk park. I found sketching in public very different than anywhere else. Everyone wants to look and take photos. This doesn’t happen in UK or other western countries. It definitely takes me out of my comfort zone as I am quite shy with my art. Today I discovered that there is an important architectural monument in Romania, since we were part of the Ottoman empire. I must check that out at some point.

Being on my own is fine. However, everyone stares despite the fact that I wear full length sleeves all the time. It’s only men on the street as well. Where are the women? There are so many men just sitting around , or selling stuff, or waiting to give you a ride.

At my departure from Miniaturk I took the wrong bus so my plan to go to the modern art museum didn’t happen. I ended up around my neighbourhood and I was wondering around the small Hagia Sophia. Was thinking about sketching it so I went into a small and cosy ‘Art Cafe packed with paintings, drawings, most of them unmounted and all over each other. I sit down for some apple tea and instead of drawing the building outside I was much more intrigued and fascinated by the man sitting across from me at the end of the cafe, smoking and leaning against red turkish pillows.Turns out he is a professional artist. He gave me some advice on my shadows and brushes. On my way out he saw the sketch of himself and really liked it. He said that I should come back and hang out after dinner. Later on, I got another glimpse of Kubi as I was having dinner but when I went back to the cafe he disappeared. Maybe I will catch him another day and I will visit his studio.

I started my day at the Blue Mosque. I felt it was a bit underwhelming, but mainly because of the tourists rather than the building. So many people! And the access inside the mosque was quite restricted. You couldn’t really admire the tiles and walk around freely. It was all very crowded and guided. Then I walked over to the Hagia Sophia. Loved it! I lived the Byzantine– Ottoman mix in the building. The Byzantine art does feel very familiar as most of Romanian Orthodox Churches have Byzantine murals. After my visit inside I went out on a bench and sketched it. Didn’t quite get the sketched I hoped for. Coming here I was worried that I will be harassed by vendors but it turns out that the tourists are the most annoying ones. For example, two men from Singapore took plenty of pictures of me drawing and made me smile for the camera too. I felt rather uncomfortable. Then some women from Iran sat next to me and started taking pictures. And two girls. And another woman. I guess this is the best place to get over my discomfort of having people watching over my shoulder as I sketch and paint.

After that I went to the Museum of Turkish and Islamic Art. Bit of a disappointment too. I was expecting lots of ceramics (which I think I will find at Topkapi), but instead there were lots of Quorans and carpets. Sill beautiful and I very much enjoyed it, especially the calligraphy. I even saw hairs from the prophet Muhammad’s beard. He allowed people to collect his beard when he was cutting it and now its considered a Holy object. My visit at the museum ended up with me buying an overpriced water. I regret buying it now, but I was too embarrassed to refuse it. It was six times the price of a bottle at the Miniaturk museum cafe. It’s strange how much the prices vary around here, even in oficial proper shopsm like museum shops and cafes. Afterwards, I spent my afternoon at the Science and Technology museum. I enjoyed the maths section the most as well as seeing medical instruments used from the 11th century onwards. The thing that stood out the most was the emphasis on how many advancements happened in the islamic world, were translated into european languages years later, were used by scientists in Europe, and the theorem/discovery has an European name now. I am sure it must be frustrating to them, since they put it on almost every panel in the museum. Over dinner Rivka told me that the hieroglyphs were decoded 200 years before the westerners decoded them by an Islamic scholar, but he doesn’t receive much credit today. While probably true and fair the whole emphasis on this seemed a bit political. After the science museum I had a tea break and some amazing baklava. Hence, my sketch of food and tea. 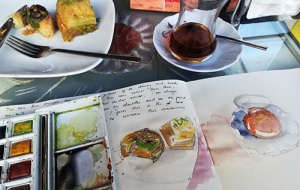 Then I went to the Taksim Square where one can admire the Turkey’s first monument as a republic. It’s all a bit military, but the base reminded me of the Ottoman architectural style. I also found the Romanian cultural center and a Greek orthodox church. Then I saw Rivka for tea, which was lovely. We had an interesting conversation about biases and loses of scientific advancement due to the lack of a widely spoken language. The area around Taksim square looks very European. It reminds me a lot of Romanian interbelic buildings. There are also a lot more European businesses than I hoped for, such as Nero Cafe, and plenty of fashion commercials with western looking models. I took all my travel advice from English speaking sources and British people travelling here and I was expecting a more ‘exotic’ place. But truth is that a lot of areas are upscale Romanian versions of bazaars and markets. The man playing Rummikub in men-only cafes are similar to the people in my grandparents’ village and in the parks in my hometown. The smoking? The same. Breaking sunflower seeds and throwing the residue on the pavement? The same. Staring at people? Similar. Taking the chair in front of your house and doing people watches? Popular in small Romanian villages. A lot of the behaviour is not that exotic at all.

You can read the whole of Diana’s Travel Report on PDF here.