Univ at the Edinburgh Fringe 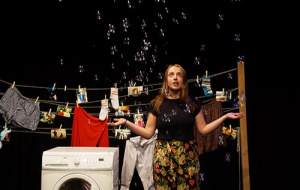 Emelye Moulton (2016, Music) and Kitty Hatchley (2016, PPE) can both be found at the Edinburgh Fringe this month. Emelye is starring in How to Use a Washing Machine and Kitty is producing two plays, How to Save a Rock and Yellow.

How to Use a Washing Machine is an original musical, featuring a live string quartet onstage. Emelye stars as Cass, one of two siblings who return to pack up their childhood home. The play has been performed at the Oxford North Wall Arts Festival, London’s Theatre 503, and the Greater Manchester Fringe.

How to Save a Rock is a carbon-neutral play, exploring what occurs when Coco, a disillusioned climate change activist finds a letter from the last remaining polar bear. Instead of using a normal LX setup, the actors are the lighting operators powering the light via a bike onstage. The play won the Samuel French New Play Award winner, Sunday Times Playwriting Award as well as the inaugural Sustainable Fringe award, organised by Creative Carbon Scotland and Staging Change.

Yellow is a new adaptation of The Yellow Wallpaper by Charlotte Perkins Gillman. In this adaptation, Charlotte suffers from postnatal depression, finding an outlet by starting a blog and connecting other women. OxfordOpeningNight.com called the play “a stunning modern adaptation”.