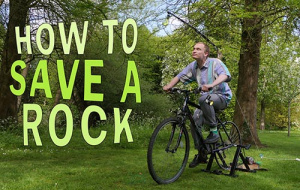 Kitty Hatchley (2016, PPE) is the Producer for How to Save a Rock, which recently won three awards at the Sunday Times National Student Drama Festival held in Leicester this year.

How to Save a Rock is set in the year 2026 following the story of Coco, a disillusioned climate change activist, who finds a letter from the last remaining polar bear washed in from the sea. The production is entirely carbon-neutral, sounds are created live, bikes and solar power are used as power for lights, and all the materials used are recycled or recyclable.

The inventive play won the Camden People’s Theatre award, the Sunday Times Playwriting award, and the Samuel French Ltd Best Play award. The CPT award, which recognises an adventurous production, offers How to Save a Rock a run at the Theatre in London, probably in the autumn.

Kitty discussed the challenges involved in producing such an innovative play:

“As the assistant producer for How To Save a Rock I was responsible for working alongside the producer on the logistics of performing the play; from budgeting to mid-show bike maintenance. How to Save a Rock is unique in the challenges it presents, and this is deliberate. At Pigfoot Theatre we’re really interested in challenging conventional theatre making (and ourselves!) and to prove that you can create engaging and provocative work that is not only thoughtfully written but also thoughtfully performed.

“From a production perspective this means that there are always a few extra things to be done. Where a conventional play would submit a lighting design to the NSDF tech staff, we had to liaise back and forth about the electrical standards our bike powered generator would need to meet to be safe to use among an 80 strong audience. When most companies would have a welcome post show breather, the director and producer and I could be found running around the theatre searching for the sunniest spot to charge the solar lights. 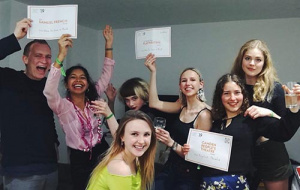 The cast and crew celebrating the win. Kitty is third from the right.

“In the same way that always remembering to take a keep cup and travel cutlery out with you adds one more thing to think about each morning, producing a carbon neutral show means that every to do list is that little bit longer. What has been so exciting about meeting these challenges is that in taking that extra time, we are able to start, and participate in a conversation about environmentally conscious theatre making that has the potential to change the way that things are done well into the future.”

Congratulations to all who ran…

This year’s Garden Play from…