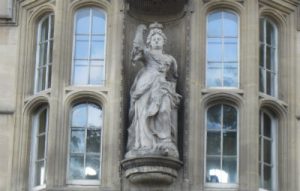 After concentrating on a monarch whose links with Univ are at best mythical, we thought that we would maintain the royal theme this month by looking at the two queens, Anne (1702–14) and Mary II (1689–94), whose statues look over the High from the Main and Radcliffe Quadrangles respectively. Mary II never visited Univ, but her future husband William III had come here in December 1670. On the other hand, Anne did visit Univ in May 1683 with her father the Duke of York (later James II) when she was still a princess.

Created ten years apart, in 1709 and 1719, these statues tell us much about the politics of the period, and in particular the activities of Arthur Charlett, who was our Master from 1692–1722, and a great networker and intriguer in Oxford.

The statue of Queen Anne (Fig. 1) was erected over the entrance to the Main Quad in October 1709. Like the statue of her father inside the quadrangle, it was a gift to the College, in this case by the brother of one of our then Fellows, George Ward. We do not appear to have a record of the sculptor who created it.

The choice of subject might seem simple enough: Anne was the reigning monarch at the time. However, several contemporaries suspected that Charlett was eager to accept the gift so that he could make a public declaration of his loyalty to the queen, and perhaps receive some preferment as a result. That was certainly the reaction of the diarist Thomas Hearne. Hearne lived across the road, in St. Edmund Hall, and had friends in Univ who passed on the latest gossip on to him. So, in his entry for 4 October 1709, Hearne wrote:

“Most of the Fellows were for placing the said Statue in the Inside of the College by King James’s; but Arthur Charlett out of his vain Glory would have it without side that he might the more be taken of. Upon which these Extempore verses were made by one of the By-Standers:

“O Arthur, Oh! in vain thou tryes
By merits of this Statue for to rise.
Thou’lt ne’re an Exaltation have
But that on Prickett’s shoulders to the Grave.”

John Prickett was the College butler, and disliked in some quarters of the College for being thought too close to the Master.

If, however, Charlett had hoped to attract royal attention with this public show of loyalty, he was sadly mistaken: Anne gave him no preferment. 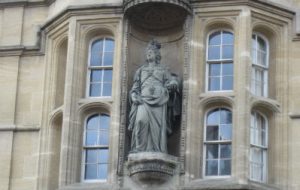 Ten years later, work was almost complete on the new quadrangle which had been built thanks to a generous bequest from Dr. John Radcliffe. Radcliffe had insisted that the new quadrangle be “answerable to the front already built”, and so there would be niches there for fresh statues. Inside the new quad, the choice of subject was obvious – this would be Radcliffe himself. But who would go on the niche outside? The answer was Queen Mary II (Fig. 2).

Once again Thomas Hearne gives us some more details. He wrote in his diary for 30 May 1719:

“Yesterday was put up at Dr. Radcliffe’s Building, next to the High-Street at Univ. College a Statue of the late Princess of Orange, whom they commonly call Queen Mary. I am told it was given by Dr. Clarke of All Souls. (I since find that it was bought with part of Dr. Radcliffe’s Money).”

This statue was copied from one at Richmond by the sculptor John van Ost, who was paid £40 for it.

The choice of monarch to place here seems at first glance appropriate enough: we can now see side by side two Stuart queens who were sisters – and, indeed who had both had dealings with Radcliffe. But all is not quite what it seems. In 1719 the reigning monarch was the Hanoverian George I, and, on the basis of the statues of Anne and James II, he would have been the obvious person to appear here. However, George’s accession had not been without controversy. He had only become king in 1714 because, under the Act of Settlement of 1701, he was deemed the closest relative to Anne who was a Protestant, and there were many people, including Thomas Hearne, who thought that the true king of Britain was James II’s son, the Old Pretender.

Arthur Charlett was always eager to protest allegiance to George I in public, but he enjoyed no preferment from George, and there are hints that, off the record and after a few drinks, he revealed slightly different views in private. Therefore the decision to put Mary II, and not George I on the High Street frontage of Radcliffe Quad might well have been seen in some quarters as a snub to the Hanoverians. 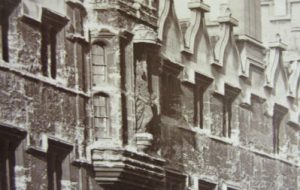 We have some early photographs of both statues in the archives. This image of Queen Mary (Fig. 3) comes from the album of Arthur Charrington (matr. 1869) (see Private Papers under Online Catalogues on our Archives page), and shows that she has changed little in the last century and a half (even if the stonework around her has been totally restored since then). 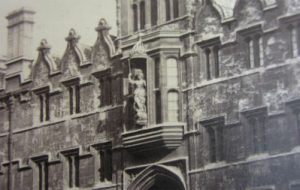 Things, however, are very different with Queen Anne. This image of her (Fig. 4) comes from the album of Arnold Kirke Smith (matr.  1869) (see Private Papers under Online Catalogues on our Archives page), and it shows that she once wielded a large sceptre. Photographs from the early 20th century show that the sceptre was still there, but we do not yet know when she lost it. People today can decide whether the statue is improved or not by its absence.