Then and Now: A Logical Bridge 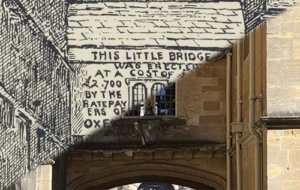 In this latest of a series of features showcasing images from Univ’s history contrasted to their modern photographic equivalents, we look at the town and gown struggle that almost prevented the building of our Logic Lane bridge.

Univ’s Durham Buildings stand, in part, on the site of a much older building known as University Hall, and are the work of architect Henry Wilkinson Moore, who also designed Kybald House. With University Hall demolished and the new Durham Buildings complete by 1903, College found itself bisected by Logic Lane ­– which had been known as both Horseman and Horsemull Lane in the thirteenth and fourteenth centuries – and those students that lodged there found themselves cut off at night with the closing, at 9pm, of the lane gates.

College had plans for a bridge to resolve the issue and these had been submitted to the city council in 1902. However, the council refused unless a rent of £5 per year was paid, arguing that it had a right of “fee farm” (a form of hybrid land ownership) over the lane.

College countered that Logic Lane was in no way a public highway as, for at least 200 years, it had positioned a post (which can be seen in the cartoon below) to prevent the free flow of traffic without its permission.

Things rapidly deteriorated. With neither side conceding, the council dug up and removed the post on 18 October, 1902, and, after further attempts to settle without recourse to the courts failed, College moved to sue the council.

The case was heard in the Chancery Division of the High Court in 1904, with the court finding in Univ’s favour.

In 1905, designed by the Durham Buildings’ architect Henry Wilkinson Moore, the bridge was finally built.
The cartoon postcard, by Davis’s of Cornmarket, was created in the same year as the bridge’s construction and the spectacularly bearded figure pointing to the all-important, traffic-preventing post, is James Franck Bright, Master of Univ 1881–1906. As can be seen from the text on the postcard, the bridge cost £3,000 with “£2,700 by the ratepayers of Oxford, and £300 by University College.”

Explore the images below by clicking and dragging the slider. 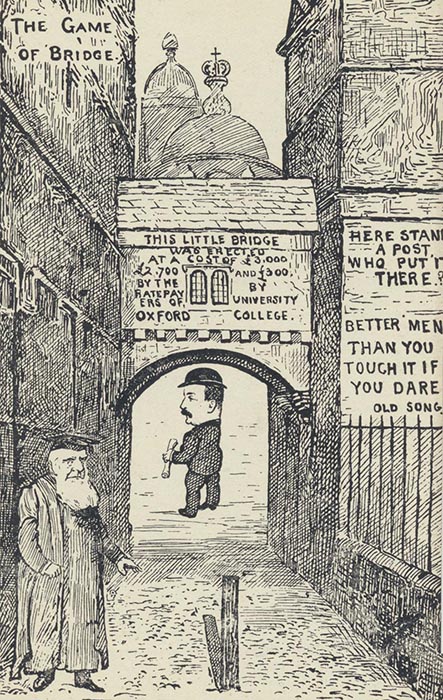 Then and Now: Shelley and the Saint

When the iceman cometh…