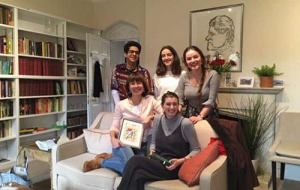 In her role as the College’s first Visitor in the Creative Arts, Amanda Brookfield (1979, English), novelist, hosted conversational sessions for students in her room in College, including “How I became a writer”, “The book that changed your life” and “Inspiration and the Blank Page”, with a special guest appearance by a golden doodle called Mabel.

Amanda was one of the contributors at the inaugural Univ in the Arts Salon, which took place on 27 September, discussing “Inspiration and the Blank Page”. Amanda is also the Chair of the Univ in the Arts Committee and spoke at their event last March. A recording of the event is available online.

Her first event in Hilary is part of Arts Week, which starts next Monday 28 January. “The writing process” will be an informal discussion of writing in various forms including journalism, memoirs, and fiction.