Stalingrad: Destiny of a Novel 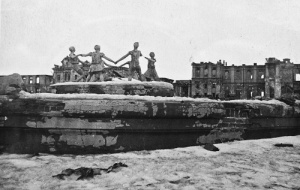 Dr Polly Jones, Schrecker-Barbour Tutorial Fellow in Slavonic and East European Studies, is appearing on Stalingrad: Destiny of a Novel on BBC Radio 4.

The radio programme discusses the journalism of Vasilii Grossman and his contemporaries during World War II. It covers Grossman’s post-war novels (in particular Stalingrad), the Stalin-era Writers’ Union and censorship, alongside other Soviet literature scholars. Catherine Merridale, previously Professor of Contemporary History at Queen Mary, University of London, narrates the historical events while Anton Lesser, known for his work on Wolf Hall and Endeavour, reads translated excerpts from the original Soviet literature.

Dr Jones is Associate Professor of Russian, teaching tutorials on a wide range of modern Russian literature and language at both undergraduate and postgraduate level. Her current research looks at literature in the post-Stalin period. She was recently interviewed by 15 min, a Lithuanian news programme, following her keynote lecture at conference in Vilnius. Dr Jones has also worked as a film consultant, including for The Death of Stalin, directed by Armando Iannucci (1982, English).

Listen to Stalingrad: Destiny of a Novel at 9.45pm every day until this Friday on BBC Radio 4 or online.