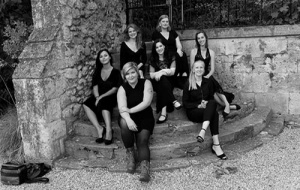 Alice Habisreutinger (2015, Ancient and Modern History) is directing a London concert series in December for the Korrigan Consort, founded by Isobel Rose (2014, Music).

The Consort is a women’s voice choir with the theme of this concert series being music about the Virgin Mary and other depictions of femininity. The concerts are taking place on 16 December at 19.30 (Farm Street Church, Mayfair) and 17 December at 20.00 (St Cuthbert’s, Earls Court).

We asked Alice how the first few years of Consort have been: “The Korrigan Consort has gone from strength to strength since being founded in 2018 by Isobel. It has been an incredible opportunity to sing beautiful and often lesser-known repertoire with a group of talented women across Oxford and London. Recently, we’ve performed with Elizabeth Kenny, toured North Wales and sung the first all-female evensong at an Oxford choral foundation (New College)! 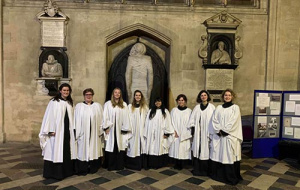 “Directing the Christmas concert series for the Korrigan Consort has been a highlight of my time as a member. It’s called ‘Ave Eva: An Exploration of Idealised Femininity and the Virgin’, so contains lots of themes that we’re particularly interested in as an all-female group. It’s not a traditional theme for Christmas time, but those who enjoy the classics will be pleased to see pieces from Britten’s Ceremony of Carols on the programme! We’re really looking forward to sharing this music with audience members and we think there’s something for everyone – from sublime Renaissance motets to an incredible solo setting of the last words of Anne Boleyn (sung by Isobel). Other pieces look at depictions of Venus, Indian goddesses, Sappho, and St Frideswide, and we’ve got a good balance between male and female composers. We’d be delighted to see some Univ OMs at the concerts.”