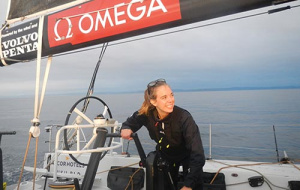 Tobermory Mackay-Champion (2016, DPhil Earth Sciences) and Annika Möslein (2019, DPhil Engineering) have both won Vincent’s scholarships for their ability and dedication to sport at Oxford.

Annika has won The Vincent’s Avery W Broadbent Scholarship for Sailing at this year’s Vincent’s Club Awards. She is one of the Captains for OUYC (Oxford University Yacht Club). Her DPhil project looks at the near-field characterisation of hybrid nanomaterials, polymer films, and tuneable nanocomposites useful for emerging technologies such as photonics sensors and optoelectronics. She previously studied Engineering Science at the Technical University of Munich (TUM), Germany.

Annika explained how she began sailing and what sailing at Oxford is like:

“When I was 16 years old, I spent seven months on a traditional tall ship sailing on the Atlantic ocean with the project “Classroom under sails”, yet, I had neither been on a yacht nor raced before I came to Oxford 2017 for my year abroad. At freshers’ fair, I signed up to the yacht club, joined their first sailing weekend – and I got hooked! I was truly passionate/a little bit crazy about sailing, took every opportunity to gain more racing experience through University sailing and beyond, and within a year, I had sailed more than 6000 nautical miles and was competing on an international level.

“The opportunity to combine both academics and competitive sailing was the main reason for me to come back to Oxford. Since I started my DPhil in January 2019, I haven’t spent a single weekend here. I travel to the seaside every Friday, devote two days to intense racing on the water and come back on Sunday night. During the week, I focus on research and work all day in the lab, while I also need to fit daily workouts in the schedule, run the training sessions as one of the racing captains for OUYC and do the related admin.

“It can be quite intense, there are no breaks, especially because I have to use all my holidays for offshore racing, where we push ourselves to the limits (without any sleep lasting longer than 2.5 hours – at least I am prepared for the night shifts during our experiments in the particle accelerator!). It never gets boring – I absolutely love sailing and engineering and I feel very lucky to be able to pursue both passions at a high level!”

The Chancellor, The Right Honourable The Lord Patten of Barnes, CH PC, will present the awards at a ceremony on 28 November at the Vincent’s Club.