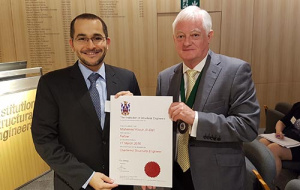 Mohamad Khodr Al-Dah (1998, Engineering), Survey Director at the Dubai Land Department, has been elected a Vice President of the Institution of Structural Engineers. The role starts in January 2020.

He has been a consulting engineer and a contractor having worked for Arup, Bovis Lend Lease, Atkins and Engineering Contracting Company (ECC). Mr Khodr Al-Dah was also previously a Director at Webb Yates Engineers. He is the first Emirati to get a degree in MIStructE (a professional qualification for engineers).

Mr Khodr Al-Dah is passionate about the renovation of historical buildings but has also helped to design new buildings, including the Dong Deumun Centre in Korea, Unilever House in London, Nottingham Trent University, Los Faros de Panama, St Regis Cairo and Cardinal Place Victoria in London. He also loves playing the piano, which you can read more about in this profile in Gulf News.

UCBC took to dry land for…