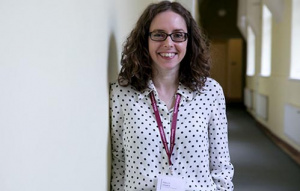 Dr Polly Jones, Schrecker-Barbour Tutorial Fellow in Slavonic and East European Studies and Associate Professor of Russian, has been interviewed by Lithuanian news programme, 15 min. Dr Jones was in Lithuania as the keynote speaker at the conference, “Patterns of everyday life in Soviet soviet (s)”, held at Vilnius University.

In the interview, Dr Jones explains how she first explored her interest in the Soviet era, how trauma manifested in the Soviet era, and her role as film consultant in Armando Iannucci’s (1982, English) film, The Death of Stalin. It turns out that Dr Jones and Mr Iannucci first met at a dinner in College.

Dr Jones’ most recent book, Revolution Rekindled: The Writers and Readers of Late Soviet Biography, is published by OUP. It is the first ever archival and oral history study of Brezhnev-era publishing and propaganda production.

The article is available to read on the 15 min website.

Maurizio Giuliano has been assigned…