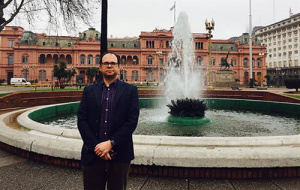 Maurizio Giuliano (1993, PPE) has been assigned to the post of Senior Programme Officer at UN Headquarters in New York. He was previously the Director of the United Nations Information Centre for Brazil.

Mr Giuliano will help promote the UN’s 75th Anniversary in 2020 and the UN’s presence at the Expo 2020 in Dubai. While in Brazil, he wrote a chapter for the book about the ways in which Brazil and other countries can prepare for the challenges of present-day peacekeeping missions. He also coordinated the publication of UNIC Rio 70 Anos: a Voz da ONU no Brasil” (UNIC Rio, 2019), which examined the UN’s role in Brazil since 1948.

At Univ, Mr Giuliano explored his interest in Latin America and eastern Europe as part of his PPE degree, before embarking on a Master’s degree from the University of Cambridge. As of 2004 he was, according to the Guinness Book of World Records, the youngest person to have visited all sovereign nations of the world (aged 28 years and 361 days). In addition to working extensively for the UN, he has also worked for the International Organization for Migration and Centre for Social Studies (CESOC).

Professor Charlotte Deane has been appointed…