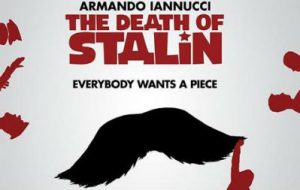 Based on the French graphic novel series by Fabien Nury and Thierry Robin, it tells the story of the chaos in the Kremlin that followed the death of Joseph Stalin in 1953.

A strong cast, which includes Simon Russell Beale, Michael Palin, Steve Buscemi and Jeffrey Tambor, play the rudderless rabble coming to terms with the loss of Uncle Joe, plotting, ploying and panicking as they do so.

Polly Jones, Schrecker-Barbour Fellow and Associate Professor in Russian at Univ, contributed to the film by providing historical background.

“’The death of Stalin was unimaginable for most Soviet citizens, including his closest associates in the Kremlin, so total was his grip on the Soviet Union after nearly thirty years in power,” said Polly.

“Armando Iannucci’s film imagines the hours and days following Stalin’s demise as an absurd, chaotic and blackly humorous power struggle laced with sinister echoes of the worst excesses of Stalinism.

“Simon Russell Beale is outstanding as Beria, the first member of the Politburo to try to seize power, but the cast is uniformly strong and the direction pitch-perfect.”

Reviews have been glowing after initial screenings, with Empire calling it Armando’s “most impressive feat yet” and Peter Bradshaw from The Guardian calling it “the film of the year.”

We wish Armando Udači with his film.