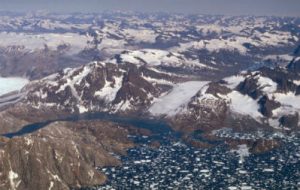 Plans are afoot for a rather remote Univ Earth Science reunion later this summer. In August Univ OM Dr Sam Weatherley (2005, Earth Sciences) will be leading a seven-week-long scientific expedition to a remote region in East Greenland in the company of two other Univ alumni, Dr Brendan Dyck (2012, Earth Sciences) and Victoria Honour (2010, Earth Sciences).

In total the team will be six strong, involving four from Cambridge (including Victoria and Brendan), one from the University of Exeter, and Sam himself, a research scientist at the Geological Survey of Denmark and Greenland. Sam comments on the expedition: ‘Since leaving Univ our research paths have converged, and a rather fortuitous series of events involving successful funding applications and good timing mean that we’ll be working with each other in the field this summer.’

The team will visit the Skaergaard intrusion (in case you’re curious, you can see how remote it is on Google Maps), where they will collect samples and field data that will enable them to tackle some key questions in their field of igneous petrology.  Additionally, the expedition will provide Victoria with some important samples for her own on-going PhD project. ‘The plan in brief,’ says Sam, ‘is that we’ll be dropped off at Skaergaard by ship, work completely unsupported for the field period and then be picked up by ship again at the end of the season.  Needless to say, this is quite an adventurous expedition; the location, remoteness (it’s about 400 km to the nearest settlement, provided that the weather and ice conditions are good)  and length of time we’ll be there for mean that the expedition will be a big challenge for the participants too.’

Univ wishes the intrepid team well for their upcoming adventures and will be reporting on their progress in due course.