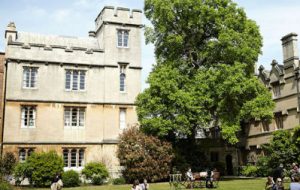 Old Members came back to College on Saturday 23 and Sunday 24 September to attend a Gaudy for those who had matriculated between 1960 and 1964.

After a chance to catch up with old friends over tea in the Master’s Lodgings, our visitors enjoyed a double act, or more correctly, triple act presentation on the College Libraries. Archivist Robin Darwall-Smith drafted an engaging talk, which was delivered by Development Director William Roth, entitled Univ Libraries over seven centuries: the buildings and their collections. This was followed by a review of some of the Library’s unique collections by Assistant Librarian, Emily Green, and a tour of the New Library in 10 Merton Street.

Following a drink in the bar and a service in the Chapel, Old Members then gathered in Hall for a formal black-tie dinner. During the meal the conversation turned to the controversial subject of sconcing.

Sconcing was traditionally a monetary fine imposed for a breach of discipline, and is known to have been used as early as 17th century. But in more recent years, the payment was replaced with a forfeit of drinking a tankard or “sconce pot” – two and half pints – of ale for “crimes” such as talking at dinner about women, religion, politics or one’s work, referring to the portraits in the Hall, or making an error in the recital of the Latin Grace (made even more likely with the longest Grace in Oxford). Many Old Members recalled, with varying degrees of fondness, the times they been sconced.

The party then moved back to the College bar for a late night of revelry. No-one, it is reported, attempted a sconce!

Many Old Members stayed for a Sunday morning Chapel service after breakfast, before fond farewells in the glorious autumn sunshine.

The College would like to thank all our Old Members who attended. A special mention must go to those who emailed us their thanks; we’re really glad you enjoyed your visit. We hope to see you all again soon.