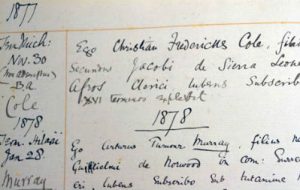 A plaque will be unveiled at University College Oxford on Saturday 14 October to recognise Christian Cole, Oxford’s first black student.

Cole was born in 1852 in Waterloo, Sierra Leone and enrolled at Oxford as a non-collegiate student in 1873 to read Classics. To supplement an income from his uncle, he taught music lessons, Responsions (the first of three examinations once required for an academic degree at the University) and helped students prepare for their divinity exams.

“During his time at Oxford the income from his uncle eventually stopped,” explains Pamela Roberts, creative producer, historian, author and Director of Black Oxford Untold Stories. “Herbert Gladstone [University College Old Member] elicited support from others including the Master at the time, George Granville Bradley, to ensure he could stay.

“Cole achieved a fourth in Greats in 1876 and became the first Black African to achieve a degree from the University of Oxford. In 1877, he became a member of University College, and in 1879, a member of the Honourable Society of the Inner Temple. He was called to the Bar in 1883, becoming the first Black African to practise Law in English Courts.”

Pamela Roberts has worked hard to raise the profile of pioneering black scholars like Cole, both through her work at Black Oxford and her book Black Oxford, The Untold Stories of Oxford University’s Black Scholar.  Pamela brought the idea of recognising Cole to the attention of the Master, Sir Ivor Crewe, and the College’s Governing Body, and has worked over the last year with Angela Unsworth, Domestic Bursar, and Archivist, Dr Robin Darwall-Smith, to develop the proposal for a plaque.

Robin Darwall-Smith says, “I have long been an admirer of Christian Cole. His ambition and determination were remarkable, and I hope that he will continue to inspire future generations of students. It is very exciting to have his place in the history of Oxford celebrated in this way.”

“Cole’s achievements have a contemporary significance and impact; in particular for a younger generation,” Pamela adds. “Young people, from all backgrounds and ethnic groups, need to be aware of the unlimited opportunities available to them.

“The plaque will not only be a visible and permanent commemoration of Cole’s time at Univ, it will also acknowledge the College’s early Black presence.”

The unveiling ceremony is open to the College members and guests and will take place at 11.30am on Saturday 14 October in Logic Lane.