You can hear Univ Archivist, Robin Darwall-Smith, talking to Ali Jones about Christian in an interview with BBC Radio Oxford (Listen from 2.42.27) and read more about his remarkable story on the BBC website.

The idea of a plaque to recognise Cole was initially brought to the attention of the College by Pamela Roberts as part of her work with Black Oxford. Since that time, Pamela has worked with Angela Unsworth, Domestic Bursar, and Archivist, Dr Robin Darwall-Smith, to bring the idea to fruition.

“I have long been an admirer of Christian Cole,” said Robin. “His ambition and determination were remarkable, and I hope that he will continue to inspire future generations of students.” 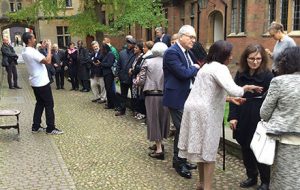 Sir Ivor Crewe, Master, who unveiled the plaque on the day, said, “University College is proud to call Christian Cole an Old Member and we are delighted to be able to honour him in this way.

“The plaque will act as a permanent reminder of Cole’s remarkable achievements as well as a symbol of our continued commitment to recognising and supporting the brightest students whatever their backgrounds.”

We hope that the next time you’re in Oxford you’ll visit Logic Lane and take a moment to remember a true Univ pioneer: Christian Cole.