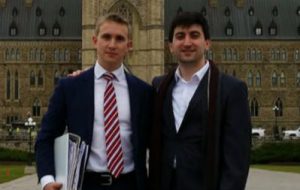 Crispin Smith (2010, Classics) and Vartan Shadarevian (2010, PPE) have been working with the US and Canadian governments over the last 18 months to address some of the issues facing people in the Middle East.

Both now at Harvard Law School, the pair have just completed a public report on behalf of the United States Commission on International Religious Freedom: Wilting in the Kurdish Sun: The Hopes and Fears of Religious Minorities in Northern Iraq. Read it at uscirf.gov

Crispin has also been invited to brief the US State Department, but please note that the previously advertised public discussion, to which Univ OMs had been invited, has regrettably been cancelled. Should this be rescheduled for a future date, details will be published in our News and Features pages and on social media.

Crispin and Vartan also co-founded a non-profit research organization last year called the Aleph Policy Initiative, and are contracted with the Canadian government on a set of research projects related to the Middle East.

Crispin said, “Vartan and I were discussing how important Univ was in getting all this started; on some level, all these projects are rooted in our time there.

“We hope all is well at Univ!”