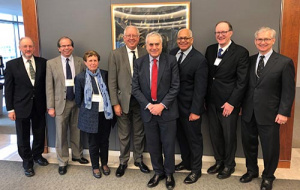 Sir Ivor is a world renowned political scientist and expert on British politics, specialising in elections, political parties, and public opinion. In his past roles as President of Universities UK and Vice Chancellor of the University of Essex, he became heavily involved in the politics of higher education and understanding the possible impacts of Brexit on education funding and research. 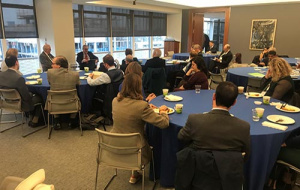 Sean Denniston (1987, History) said: “Almost exactly two years ago the Master was in Washington and spoke on Brexit. We appreciated his update and, while a lot has happened, it could be argued nothing’s changed.

“So, this was actually ‘Brexit over Breakfast 2.0’. For the first instalment, we met on a Saturday morning at Le Pain Quotidien. This time we were updated on Brexit and the upcoming General Election in the main conference room at Arnold & Porter as the guests of Ambassador Thomas Shannon. We were impressed by the update and the upgrade. 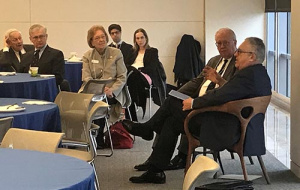 “Sir Ivor is retiring from Univ where he’s done so much for the College finances and enlarging our physical size, but this event reminded everyone he is also a teacher. I think the Master enjoyed speaking and answering questions on Brexit and elections as much as we enjoyed listening and asking questions.

“While this was a Univ event, other UK Universities alumni and Arnold & Porter lawyers were invited. The Master’s talk was most importantly a Brexit and General Election update, but the fact that within Univ we have an internationally recognised elections expert in Sir Ivor and a recent senior State Department Civil Servant in Ambassador Tom Shannon impressed everyone.”