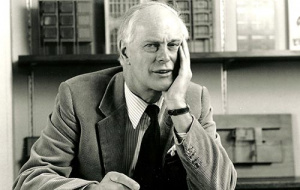 While working on the history of Univ, I had the good luck to talk to many former students and Fellows of the College about their memories of Univ in times past, and they were all very generous with their memories. Several of them are now dead, but I still have their tales written down. One of my more memorable interviews was held in April 2007 with Sir Philip Dowson CBE, PRA RIBA, of Arup Associates, Old Member of Univ, and architect of Stavertonia.

Of course, most of our talk was about Stavertonia, and notes on that part of our interview have already appeared on the website, but we discussed much else, and the whole interview was too interesting not to share with a wider audience. 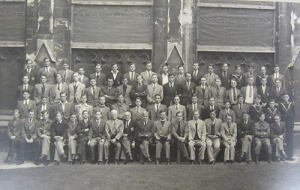 Sir Philip came up to Univ in 1943 as a cadet student. During the Second World War, arrangements were made for undergraduates to come up to Oxford for six months, to combine military training with academic work, on the understanding that, when they came back from the war, they could, if they wished, take up a place here. In Sir Philip’s case, he chose to go to Clare College Cambridge on being demobbed. Nevertheless, he clearly looked back on his time at Univ with affection. 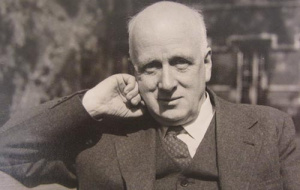 His first memory of Univ was when he first arrived at the College, and was met by a rather august figure wearing a suit, who said “Good evening, sir. You must be Mr Dowson.” He was most impressed, for he had never been called “sir” before. This was Frank Collett, our legendary Butler, and Sir Philip came to think very highly of him. Once settled in, Sir Philip played a lot of sport, especially cricket, and he was for a while Secretary of the College’s cricket team. He also played rugger and hockey. Sadly, no sports photos from 1943 are preserved. On the other hand, he liked to work late at night, from midnight until 3am.

Of the senior members of the College, Sir Philip admired the Master, Sir William Beveridge, as an enormous figure, but thought him rather distant and invisible, especially during the weekdays. He also didn’t appear to have much of a sense of humour. Sir Philip had much happier memories of Kenneth Wheare, whom he remembered as having “a wonderful wit”, and John Wild.

Sir Philip’s happiest College memories, however, were of his undergraduate friends. He called Univ “a very social College”. He enjoyed going to people’s rooms after dinner to chat, and found it exciting to find himself at dinner sitting next to someone in a totally different discipline from his own.

When he went to Cambridge after the war, he found that the faculties, rather than the colleges, occupied a more central role. As a result, he did not know that many people in Clare College, and he clearly regretted that.

The crucial difference for him was between the two JCRs: the Univ JCR was a real social centre, where people would regularly congregate. The Clare JCR had a television in it, and that was that. 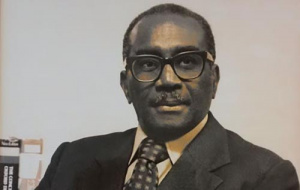 During the Second World War, Univ undergraduates did not have the College to themselves. Merton and Keble were requisitioned for government purposes at various times, and, when Sir Philip was up, several students from Keble were living in College. One of these Keble students was Cameron Tudor, who came from Barbados.

While in Oxford, Tudor became the first black President of the Oxford Union, and on his return to Barbados served variously as Deputy Prime Minister, Foreign Minister and Education Minister. Tudor made a great impression on Sir Philip: he remembered how Tudor “used to hold court” in Radcliffe Quad when people were playing bowls there. 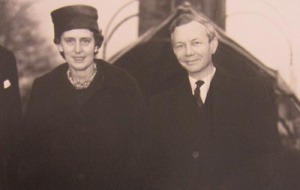 After the war, Sir Philip formed a new link with Univ when his sister Aurea married our then Classics Fellow, Freddie Wells. In 1943, Wells was working in Naval Intelligence, overseeing topographical research into occupied territory, and so was not in College. However, Sir Philip had sailed on D-Day to Normandy, and had with him some photographs of the land in front of him, which, he later worked out, had been created by Wells’s team. He found it “interesting” that he had effectively been helped by his future brother-in-law! Freddie and Aurea Wells lived in 10 Merton Street, and Sir Philip became a regular visitor there.

In the late 1950s, Sir Philip was invited to submit designs for a new building to be erected on Logic Lane. His plan was that on the east side of the lane would be a wall running along it. At ground level there would be an underground car park.

Above it would be a courtyard, which could be paved or grassed. He called it a piano nobile. At the west side would be the main building proper, set back so as not to impose too much on Logic Lane. He was less interested in following Gothic styles or not, but he did want to explore morphology of the spaces, and how it was placed in a city context. In particular Sir Philip liked the high walls of some Oxford lanes, and he wanted to achieve something similar in Logic Lane. His designs, however, were passed over in favour of those submitted by Stirrat Johnson-Marshall, which became the Goodhart Building. Sadly, no drawings of Sir Philip’s designs are in the Univ archives, but something might possibly be preserved in the archives of Arup Associates. Peter Bayley remembered them well, and more than once told me that the result would have made for a more impressive building than Johnson-Marshall’s.

Instead, of course, Sir Philip’s great contribution to the architectural history of Univ was Stavertonia, for which he was appointed architect in July 1967. His main brief, as he recalled, was that the College wanted a building in which to put people up to stay. It was not intended to be too grand (no private bathrooms), and rooms should be arranged in groups for friends to live together. He envisioned a large central space in each floor to have cushions to sit on, say.

Sir Philip liked having the floors at half levels, so that people would feel much closer to every level. He also liked the horizontal/vertical effects, with no stratification. Because people would spend time in kitchens, he wanted them in the middle. Sir Philip admitted that he was asked to create Stavertonia on a tight budget. The best thing to do was to build each structure as simply as possible.

He liked the big windows – it was a good feeling, he thought, to feel some translations between the internal and external. He didn’t like walls which felt as if the windows had been put in like holes in a piece of cardboard. So, he worked to a simple unit for Stavertonia, with the window seats there to make one enjoy living on the edge. He also hoped that the roofs would be terraces.

I did politely make one point about Stavertonia to Sir Philip. For one year I lived in the side of Bennet Building directly opposite Percy Building, so that everyone in each building could see each other (and their doings) perfectly, and I admitted that I didn’t like it. Sir Philip’s answer was robust: one puts up with this in towns. Does it matter? I took his point of view, but am not sure that I agreed – and I am aware that I am not alone in this…

One source of regret for Sir Philip over Stavertonia related to its construction. The College’s contractors were going bankrupt, and he urged the College to try to prevent this, for fear of losing the workforce, who knew the project. The contractors were not rescued, and the College had to be its own foreman – which Sir Philip thought a great misjudgement. At the same time, Sir Philip was designing the Sir Thomas White Building for St John’s College, whose contractors were also in financial trouble.

However, there he persuaded the College to bail out the contractors, so that the workforce was retained, and much trouble saved.

Sir Philip had designed several buildings for student accommodation in both Oxford and Cambridge, and, as I look back on these notes, it comes across how much he enjoyed the challenge of creating worthwhile and interesting accommodation, even when faced by financial constraints or (occasionally) an over-interested Governing Body. I also remember the enthusiasm with which he talked about what a university should be. For him, it was about culture in depth, and in that context he especially praised Jennie Lee (a politician whom he admired) when she said that she was a passionate elitist on quality and a passionate democrat on access.

On 12 January, while looking forward…

Dr Sturgis, Director of the Ashmolean…