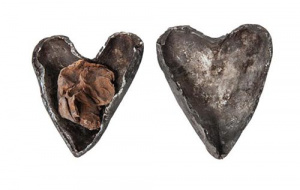 Dr Xa Sturgis (1982, History), Director of the Ashmolean, was interviewed for The Guardian recently about Spellbound, a new exhibition on the history of magic, which opened at the Ashmolean on 31 August.

Spellbound: Magic, Ritual and Witchcraft displays 180 objects from 12th century Europe to the modern day, including “witch bottles”, poppets, and dead cats that were entombed in wall cavities. New artwork has been commissioned for the exhibition, including Katharine Dowson’s “Concealed Shield”, which was inspired by the practice of putting pierced hearts in chimneys.

Xa Sturgis commented: “Although we live in a rational age, we do still think magically. Not many of us would want to take a photograph of our mothers and then gouge the eyes out – just in case.” Dr Sturgis is himself involved in the magical realm, performing as a professional magician under the name “The Great Xa”.

Dr Sturgis studied at Univ before pursuing his MA and PhD in art history at the Courtauld Institute of Art. He became Director of the Holburne Museum in Bath, overseeing a £13m extension. Xa Sturgis replaced Christopher Brown as Director of the Ashmolean Museum in October 2014 and was also appointed Supernumerary Fellow of Worcester College, Oxford.

Spellbound is running at the Ashmolean Museum until the 6 January 2019. Tickets are discounted for students, University staff, and alumni.