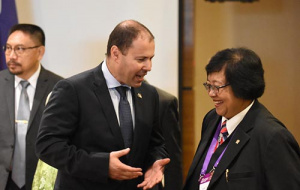 On 24 August, Scott Morrison won the second leadership spill, which was contested by Peter Dutton and Julie Bishop. A deputy leadership spill followed with Josh Frydenberg obtaining 56.1 percent of the vote. Morrison then offered him his former role of Treasurer. 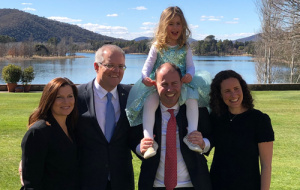 “It is an honour and a privilege to serve as Deputy Leader of the Liberal Party and Treasurer of Australia.

“Like former Australian Prime Minister Bob Hawke, I am not only a proud Australian, but also a proud graduate of Univ – a place and time from which I have very fond memories.

“Australia and the United Kingdom share the closest of relationships, underpinned by our shared heritage, common values, aligned strategic outlook and interests.

“I look forward to continuing to develop this relationship in my new role as Treasurer.”

Minister Frydenberg studied at Univ for a Master of International Relations degree on a Commonwealth scholarship. After leaving Univ, he attended John F. Kennedy School of Government at Harvard University then returning to Australia, where he worked as an adviser to Foreign Affairs Minister Alexander Downer and policy adviser to Prime Minister John Howard. He has held the seat of Kooyong since 2010 and was appointed Minister for Resources, Energy and Northern Australia in the First Turnbull Ministry in 2015. 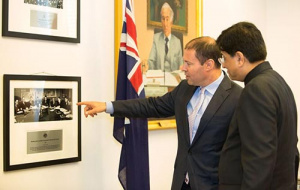 Minister Frydenberg has continued his association with the College; he was instrumental in the commissioning of a portrait of Bob Hawke (1953, Economics). Frydenberg approached Hawke himself and helped to raise the money for the portrait. Bob Hawke attended Univ as a Rhodes Scholar and infamously drank two and half pints of beer in 11 seconds, setting the world record. His portrait currently hangs on the South Wall of Univ’s Hall.

Univ DPhil student Emma Lawrance (2013, Clinical Neuroscience) interviewed Minister Frydenberg for the Spring 2016 issue of The Martlet. You can read Emma’s interview with him here.

The Age Editorial in The Canberra Times recently published an in-depth profile on Minister Frydenberg – in which the College features heavily. The article is available online at theage.com.au.