The play premiered in New York at LAByrinth TC in 2000, in a production directed by Philip Seymour Hoffman. It then transferred to the Donmar Warehouse in London in 2002 where it was nominated for an Olivier Award. Since, it has been revived in London. The Manchester production, staged by Murray’s own Elysium Theatre Company, will run 16 – 19 May. 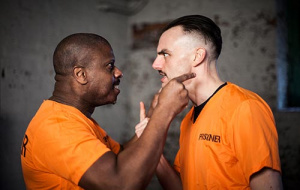 Multi-award winning director Jake Murray is no stranger to Manchester, having spent seven years at the Royal Exchange Theatre, progressing from Michael Elliott Foundation Bursary Trainee Director to Associate Artistic Director before leaving to go freelance. He was co-artistic director with Sarah Frankcom of the Exchange Studio, during which time the space was nominated for a Peter Brook Empty Space Award.

Jesus Hopped The ‘A’ Train is described as “a funny, powerful, adrenaline-fuelled drama of good and evil, penalty and redemption.”

Further details of the production at broadwayworld.com and tickets via homemcr.org