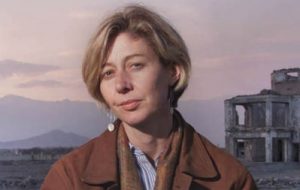 Univ Honorary Fellow, Christina Lamb OBE (1983, PPE), talks about her friendship with Malala Yousafzai and outrunning the Taliban, in an interview with Honi Soit.

Christina Lamb OBE is one of this country’s leading foreign correspondents and a bestselling author. She has won countless awards for journalism and was presented with an OBE in 2013.

In 2013 Christina co-wrote I am Malala, the story of Malala Yousafzai the schoolgirl who was shot by the Taliban for advocating female education. Malala went on to become the youngest ever recipient of the Nobel Peace Prize and has just won a place to study PPE at Oxford.

Christina is not afraid to put herself in danger for a story, and recounts the time she was ambushed by the Taliban, in the interview. “We were running for hours in this incredible heat. Gasping for air… jumping in and out of ditches, with Kalashnikov fire…bullets hitting all around.” She was also on a bus blown up by a suicide bomber, killing over 150 people. “When the bus blew up it was terrible,” she says “[But] unlike the ambush that lasted hours, you knew you’d either died or you hadn’t.”

The main focus of her work today is telling the stories of women who face violence and persecution in countries like Pakistan and Afghanistan. “There are Afghan women that we made a lot of promises to, in the West, that their lives would be better.” But, Christina sees little improvement in their situation.

We are proud to call Christina a member of our community. We wish her every success with her future endeavours – we will be watching with interest.

You can read the full interview on the Honi Siot website.