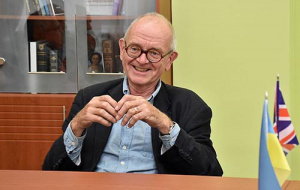 Marsh also chose a book on the Ukrainian language, and his garden shed, complete with tools, as his luxury item. He has been working in Ukraine since 1992 and his work there was the subject of the BBC Storyville film The English Surgeon. His acclaimed memoir Do No Harm: Stories of Life, Death and Brain Surgery was published in 2014 followed by Admissions: A life in brain surgery in 2017.

The addictive nature of surgery and the reputation of surgeons as “psychopaths” were also topics of discussion. Marsh said that surgeons only appear uncaring because of “ego-defence, as psychiatrists call it”. He commented “the nicer you are to patients the more it hurts you if things go badly”.

The episode of Desert Island Discs is available on the BBC website.

Henry Marsh is our guest speaker at the next Univ in the Arts event on 24 January at the Medical Society of London.