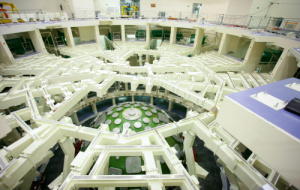 Professor Peter Norreys, Supernumerary Fellow in Physics, has been awarded a €700k two-year grant from EUROfusion to work on “routes towards high gain inertial fusion energy”.

The grant directly addresses Sir David Attenborough’s call for action at the UN Climate Change conference last month in Poland. The team are preparing to use the Megajoule Laser facility in Bordeaux, France.

Sir David Attenborough called climate change “the greatest threat” humanity has faced in thousands of years at the opening ceremony of the conference. He also took the “People’s seat”, acting as a link between public and policy-makers.