Níall McLaughlin was educated in Dublin and received his architectural qualifications from University College Dublin in 1984. He established his own practice in London in 1990. Níall won Young British Architect of the Year in 1998, he was one of the BBC Rising Stars in 2001 and his work represented Britain in a US exhibition “Gritty Brits” at the Carnegie Mellon Museum. His designs have won many awards in the UK, Ireland and the US, including RIAI Best Building in the Landscape and the RIBA Stephen Lawrence Award for the Best Building under £1 million. Níall is a professor of architecture at University College London. He was chair of the RIBA Awards Group from 2007 to 2009. 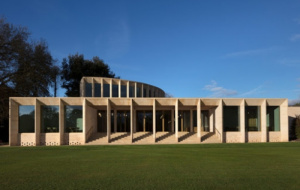 The Sultan Nazrin Shah Centre at Worcester College, Oxford houses a large lecture theatre, a student learning space, seminar rooms and a dance studio. The building was designed as a theatre in a garden, raised on a podium. A curved stone auditorium opens directly onto an oak-ceilinged foyer that extends out to pergolas and terraces overlooking the cricket pitch. The theatre is framed by a high stone screen that rises to allow clerestory light into the space. It can operate either as a fully enclosed, darkened environment or as a bright day lit space surrounded by gardens on all sides.

Jesus College, Cambridge
Niall McLaughlin Architects added a new facade to a 1970s building at Jesus College, Cambridge, with a vertical composition of stone and timber elements. The renovation work carried out on the red-brick Webb Building involved carefully restoring rooms such as the existing library and dining area, as well as introducing a mixture of offices, social spaces, and student accommodation.

The lightweight glazed timber pergola of the café pavilion differs from the substantial brick and oak entrance building which differs again from the balconies and profiled stone walls of the re-modelled Rank Building. The various elements across the site were unified through a consistent palette of high-quality traditional materials including oak, stone, brick and quarry tiles — chosen to suit the historic setting. Untreated oak glulam framing around glazing was given a chamfered profile to echo the existing stone window surrounds. 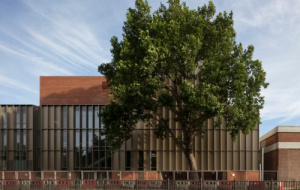 LAMDA Drama School, Baron’s Court
In 2002 LAMDA decided to move their teaching school and theatre to a new site in Hammersmith, West London. They purchased the old Royal Ballet School site, sandwiched between a six-lane highway and a railway line. Níall McLaughlin Architects were appointed to work with LAMDA over an eight-year period to plan the phased transfer and occupation of the new site.

The site’s position presents considerable problems for a teaching environment, including traffic noise, railway noise and pollution. At the same time, it is an extraordinarily high profile location with great visibility. Níall McLaughlin Architects designed an inexpensive building that relishes the gritty urban qualities of its location and provides robust, calm spaces for learning.

You can hear Níall McLaughlin discuss the inspiration behind the plans for Univ North, alongside Kim Wilkie the landscape architect, at the Meet the Architects Q&A we held last September.

After 25 years of running his…