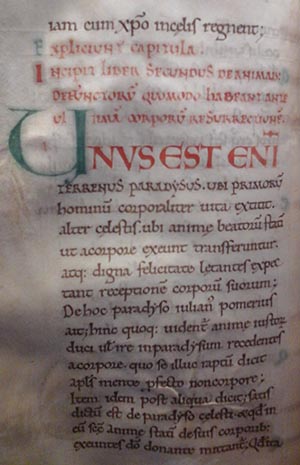 Univ Library has been collaborating with the Bodleian on the “Medieval Manuscripts in Oxford Libraries” project. The Bodleian’s project is generously funded by the Tolkien Trust, and provides finding aids and descriptions of all known Western medieval manuscripts in the Bodleian Library, and other selected Oxford colleges. In this context “Western” denotes manuscripts written in Latin, Greek, and the European vernaculars (including Slavonic languages) and “Medieval” denotes manuscripts written before approximately 1500 and includes papyri from the classical period.

You can view MMOL at medieval.bodleian.ox.ac.uk

Univ is one of six colleges currently involved in the project, with others set to join in due course. We have contributed summary descriptions of all our 131 medieval manuscripts. MMOL allows researchers to find records for manuscripts online and to cross referencing by authors, works, provenance, and places of origin.

Assistant Librarian, Phil Burnett, says “Our contribution to MMOL is significant because it opens up access for scholars to our collection of medieval manuscripts and helps to give our collection greater prominence. Currently, researchers have to consult H. O. Coxe’s Catalogue of the Manuscripts in the Oxford Colleges. Coxe formed the bedrock for these records, but as this was written in 1852 it needed updating with information that has come to light through recent research.

“The various lockdowns imposed by COVID-19 and the subsequent shutting of the College libraries provided an excellent opportunity to collate all of this information into a summary catalogue which has meant we have been able to contribute to the MMOL project.”

The records are currently in the final stage of editing and will be published on MMOL over the next few months.

This project paves the way for the much bigger project of creating an up-to-date detailed catalogue of our manuscript collection.

For this month’s Treasure, we aim to answer…