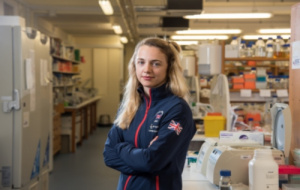 Rachel is OUABC women’s co-captain and helped organise the event, with boxers coming from Cornwall and Essex to compete against the OUABC team. Unsurprisingly, Rachel won her fight! Last year, she won silver at the BUCS boxing championships and holds a full Blue in boxing.

Rachel also holds a full Blue in judo. She made her GB debut at the European Open in Glasgow in October and has been awarded British Universities & Colleges Sport (BUCS) judo championship medals for Oxford every year she has competed.

She has also recently been awarded a Vincent’s William S. Broadbent Jnr. Scholarship. In 2017, she was named Sportswoman of the Year by Oxford University Sport.

You can see a glimpse of Rachel in action below.